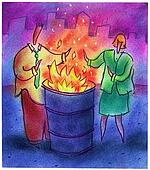 WASHINGTON (AP) – Employers hired only 54,000 new workers in May, the fewest in eight months, and the unemployment rate rose to 9.1 percent. The Labor Department report offered startling evidence that the U.S. economy is slowing, hampered by high gas prices and natural disasters in Japan that have hurt U.S. manufacturers.

WATCHWOMAN’S COMMENTS: It’s the failed policies of the Obama Administration.  I’m no Mitt Romney fan (he invented Obamacare, oops I mean RomneyCare, but then again a rose by any name still smells the very same — and so does dog poop) but Mitt is right about the things he said in his announcement for his candidacy, that all the Obama bailouts didn’t meet with success, the Stimulus didn’t stimulate, and everything Obama has tried so far has failed miserably.  It just keeps on getting worse and worse.  Obama is a socialist-communist with hard-core already-tried, already-failed communist solutions for every problem.  Communism has failed every time it’s ever been tried. ▬ Donna Calvin