I don’t know about you, but one of effects of childbirth on me was a compulsion to spill the details. All of them.

The whole thing was fascinating to me, so of course I assumed everyone else should be fascinated as well in the recounting of every minute of labor, describing the intensity of discomfort or pain and the aftermath. Or afterbirth, I should say. I wanted to tell the story again and again..whether or not anyone was interested.

This past month, that kind of compulsion has returned.

Some, here and elsewhere, have commended me on my “courage” in writing about this most painful of experiences..my purported strength.

Don’t. There’s really no courage involved. Believe me, I am confronted by a hundred small tasks and moments every day that require far more courage than this. This is nothing.

Partly, I imagine, because writing and communicating are natural activities for me. Oddly enough for an introvert, but true. As I wrote before on the other blog, some people deal by cooking or taking long walks or knitting something – I write. Nothing makes sense to me unless I write it down. Anyone who has written for a long time will tell you the same thing. After a while you just start to experience life as writing fodder. It sounds dreadfully utilitarian, but it is true, and it is really not at all utilitarian.

After a while, too, then something else happens. For years I wrote columns for real, regular newspapers on paper about the juncture between faith and life. When I stopped writing those columns, I found that my spiritual life suffered – I was no longer paying as close attention to the world around me, constantly searching for signs of grace and Presence…because I was no longer under deadline.

So for me to write about my husband’s death is not a brave thing. It is an organic thing.  It requires discernment and tact, though. Presenting the rawness of the present moment as it is scrawled in my Muji notebooks would not be helpful..and indeed might not be reflective enough of the greater picture which I really do see. Pieces fall into place all the time, expanding the picture as I go.  I also must respect his privacy and the integrity of his life and death.

Another motivating factor, about which I will write more at a later date, is what Michael taught me about life and death. Michael was all about freedom in Christ, resisting idol-making, treating nothing else as God in your life except God – that is letting nothing control you, to not be captive by anything – present sin, past sin or a difficult situation. What rules your life – that situation…or God? Are you a captive or are you free in Christ, because he has reconciled all things and conquered sin and death?

He emphasized really believing that God is present in every moment and experience, no matter how strange or wretched and, as he quoted Father Benedict Groeschel in a column he wrote the evening before he died, to embrace a life in which “We have no plans but to be led by God.”  He was about moving forward in Christ – with Christ.

And what I have found over the past month is that the response that has met my few hesitant attempts at articulating some aspects of my experience has been expressive of many good things. Through the comments and emails, I have discovered that I am not alone and that indeed, none of us are. Readers have benefited from the few thoughts I have decided to share, and I am glad for that. So, within the strictures I have set for myself, I continue.

Back to my original point.

Childbirth rendered me loquacious about my experience. I find that this has had the exact same effect.

In fact, there are times I must hold myself back.

I want everyone to know, and I feel no compunction about sharing exactly what happened with people whom I have just met.

The first weekend we were back home after the funeral in Florida, I decided normal was the best way to go for my 4- and 7-year old boys. Normal for the 17-year old, too, but for her, “normal” meant being out with her friends, so that was okay.

A normal Friday night was “Fun Friday” as Michael would announce it on his return home from work. That first Friday back, we got out of the car after returning from school, and I hesitantly asked, “Is it Fun Friday?” …thinking no way.  Of course it’s not fun. How can it be?

No hesitation on their parts.

More normal. “Do you want to go to Buffalo Wild Wings?”

So we went. And I was sort of okay until I sat down and opened the menu. That poor waitress.

As well as the poor hairdresser a week or so later. And the poor bank teller when I tried to explain why these checks I needed to deposit in our account were not endorsed on the back.

There could have been more – in fact I cancelled a dentist’s appointment for this morning  – because I had no idea how I would react to the idle, innocent question, “So, how’s it going?” , but I think I have restrained myself on most of those other occasions when I have so wanted to relate this surprising, sad, confusing story to perfect strangers.

I don’t know why I have felt this compulsion. It is not that I am seeking sympathy – I don’t think. I have plenty of sympathy and support.

I think it something akin to what childbirth moves us to do: it is so elemental, so surprising, such an absolute mystery that calls into question all of our previous assumptions…we just can’t believe it happened, we have to keep telling it, we are desperate for a witness. Am I crazy? Listen and tell me. The experience of this essential moment in which humanity and transcendent meaning are clearly knit, we are almost driven to check in with other human beings to see if they, too, have encountered these same questions and if their answers are anything like ours. 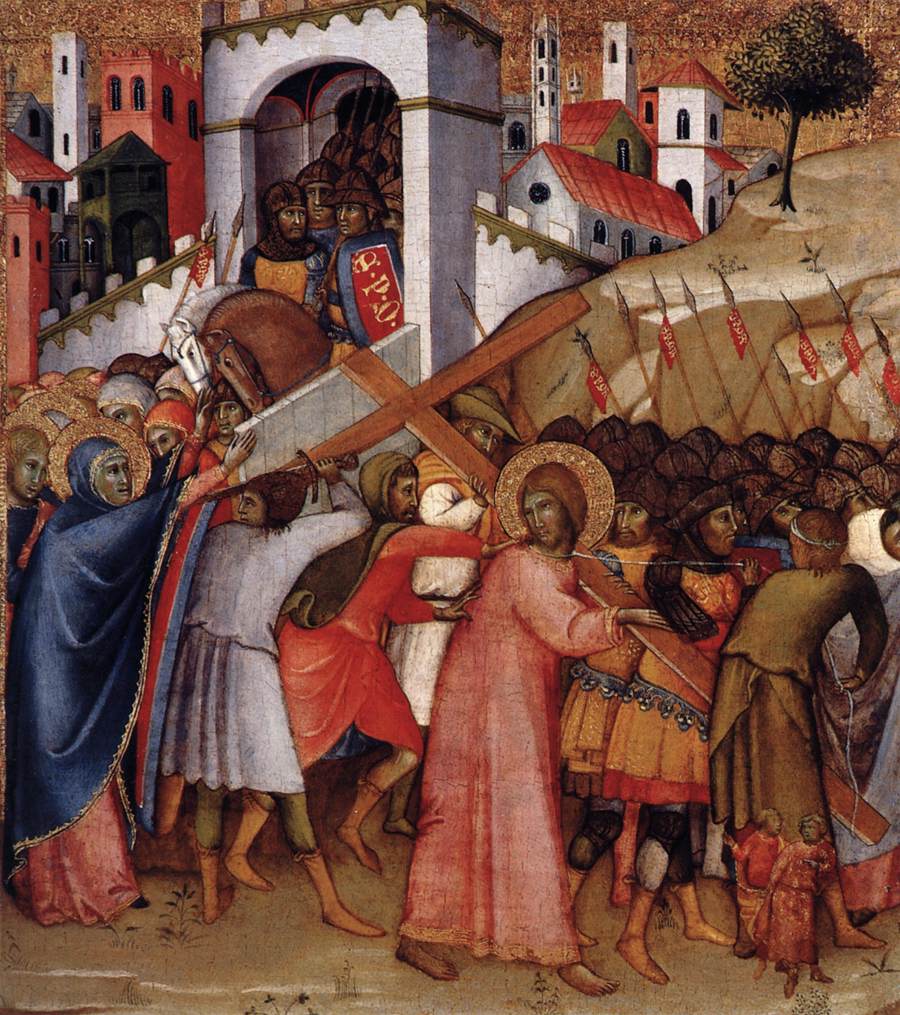 As I walk around with this loss and mystery within, alternately holding it close and wanting to present it to others, inviting them to examine it with me, I have been moved to wonder, in turn, what losses and mysteries they carry themselves.

For they do. As someone once observed, “Be kind, for everyone is fighting a great battle.”

What I settle on is this, for the moment:

Everyone is carrying the pain around, along with the hope and grace that does, indeed, glimmer, even faintly.  It is maybe not so sensitive and might actually be an act of self-absorption  to simply dump all of our own pain on anyone who happens to walk by  – we can’t do that, for in indiscriminately pouring out our souls we are revealing an indifference to what others are prepared to hear.

Crosses, we call them.

Everyone is carrying a cross. Heavy crosses. Perhaps part of the Christian life involves recognizing that reality at the core of every person’s life and a delicate balance of being careful not to add to the burden, but to be open, at the same time, to allowing Christ to work through us, if he chooses, to help them bear it…for just a little while.

read next post
What Did You See and Hear?
archives most recent
More from Beliefnet and our partners
previous posts