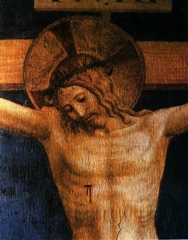 It’s Good Friday, the day that we Christians “celebrate” — actually, commemorate — Jesus’ crucifixion. For the last several years, in my little corner of Christianity, there’s been lots of talk about the atonement — that is, about what exactly happened, cosmically speaking, when Jesus died. In fact, the nature of the atonement has become the bête noire of emergent Christians and the cause célèbre of the resurgent Reformers.

I firmly believe, in unity with the Council of Chalcedon, that Jesus of Nazareth was both fully human and fully divine. This belief is key to one’s understanding of the crucifixion. If Jesus was a little less than fully either, then his death means something different than what I think it means.

One key to my understanding of the crucifixion is the beginning of Jesus’ ministry. At about the age of 30, Jesus arrives at the Jordan River and is baptized by his cousin, John. He then retreats into the wilderness where, after a 40-day fast, he’s tempted. Really tempted. That is, the result of Jesus’ interaction with “the tempter” was not foreordained. Nor did Jesus know that he was divine in such a way that he wouldn’t cave in to the temptations before him. Had Jesus been cognizant of his divinity, he would not have been truly tempted.

Another key to my understanding of the end of Jesus’ life is what he did with the three previous years of his life. It seems to me that he did just a few things: 1) He taught about the Kingdom of God; 2) He performed miracles; 3) He developed a following that included 12 close followers and, by the end, hundreds of others.

The importance of 1) and 3) are pretty obvious to Jesus’ mission. The significance of the miracles, however, is sometimes misunderstood. They were not significations of Jesus’ divinity (as evidenced by the other magicians and sorcerers on the scene in Jesus’ day). Instead, they were little in-breakings of the new age that Jesus, as the Messiah, was inaugurating.

Especially in the healing miracles, Jesus touched the people who had been condemned as “unclean,” and thus unworthy of Temple worship — woman with an issue of blood, blind men, lepers, paraplegics, a crazed demoniac — and cleansed them. He upset the order of things by bringing the people who had been marginalized — now you can include tax collectors and whores — by the dominant religion of his time and place and making them “right” with God again.

So when Jesus’ three years of traveling, teaching, and miracles ends in Jerusalem, on a Roman cross, his death culminates the life that he lived. His execution amidst common thieves is his ultimate act of solidarity with every human being who has experienced godlessness and godforsakenness. In other words, every human being.

On that very day, a few of the human witnesses understood this at an intuitive level, most 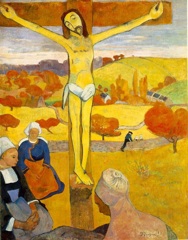 notably the Roman soldier who, from the foot of the cross, said (probably under his breath), “Surely this man is the son of God.” And since that time, billions of human beings have found solace and victory in the fact that God rather,

by taking the very nature of a servant,
being made in human likeness.

And being found in appearance as a human being,

he humbled himself
by becoming obedient to death– even death on a cross!

Some people today may find it compelling that some Great Cosmic Transaction took place on that day 1,980 years ago, that God’s wrath burned against his son instead of against me. I find that version of atonement theory neither intellectually compelling, spiritually compelling, nor in keeping with the biblical narrative.

Instead, Jesus death offers life because in Christianity, and in Christianity alone, the God and Creator of the universe deigned to become human, to be tempted, to reach out to those who had been de-humanized and restore their humanity, and ultimately to die in solidarity with every one of us. Yes, he was a sacrifice. Yes, he was “sinless.” But thank God, Jesus was also human.

The hope he offers is that, by dying on that cross, the eternal Trinity became forever bound to my humanity. The God of the universe identified with me, and I have the opportunity to identify with him.

Today, and every day, I hang with him on that cross.

In Dallas for Good Friday?
archives most recent
More from Beliefnet and our partners
previous posts