Billions of words have already been written and spoken yesterday and today regarding the inauguration, everything from the Justice Roberts oath flub to Michelle Obama’s ball gown.  I’ve got opinions, of course, but nothing particularly new to say.  So, instead, I’ll just post a little around-the-horn from some of the more interesting items I’vbe read.

1) Over at Religion Dispatches, Michael A. Elliot points to Rick Warren’s sermon last Sunday, delivered at MLK’s Ebenezer Baptist Church in Atlanta.  It seems that Warren was his own, common-man self, even obliquely paralleling the outrage over his Prop 8 controversy to the persecution that MLK endured.  Here’s a taste of Elliot’s essay:

I had never
really listened to Warren at length before, but what struck me during
this time is how his charisma stems, in part, from his unthreatening
presence. He’s overweight, but not so much so that one becomes
uncomfortable looking at him. His goatee makes him look a little goofy,
like a high school English teacher. While he raises his voice, he never
seems to give over the religious ecstasy.

I thought Warren’s inauguration invocation was similar yesterday.  To me, the negative was that it was less a prayer and more a sermon to God.  In the positive, I appreciate how Warren is just himself — everyman — in his delivery, so unlike the stilted and affected cadence of the speakers at today’s National Prayer Service. (In fact, that ceremony is so stiff that MSNBC just switched over the the Timothy Geitner confirmation hearing.  So did CNN.  Fox is still showing the prayer service.)

2) Mark Ambinder, via Speech Wars, says the the words, “nonbelievers” and “Muslims” have never before been used in an inauguration speech.  Clearly, Obama both acknowledges and embodies the religious and ethnic pluralism that is our reality in America.

But Warren concludes by saying that he is praying “in the name of
the one who changed my life, Yeshua, Isa, Jesus, Jesus
(hay-SOOS)”–which is to say, not just Jesus as named in English and
Spanish but also in Hebrew and Arabic. For Jews, Yeshua is the name by
which Jews for Jesus proselytizes among Jews, as in the pamphlet I was
handed this very day by a member of the Rockville, MD Jews for Jesus
chapter. Praying the Lord’s Prayer in the names of Yeshua and Isa (as
far as Muslims as opposed to Arabic-speaking Christians are concerned),
is an evangelistic strategy. It is not inclusive, as Gilgoff and ABC
News’ Susan Donaldson James believe, but hegemonic.

4.) Bob Carlton points us us to a word cloud of Obama’s inauguration speech: 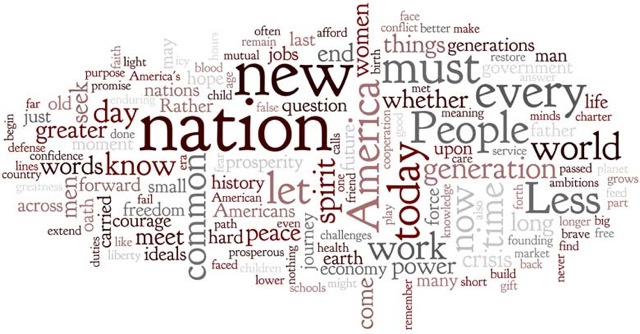