Seeing Our Daughter in Color 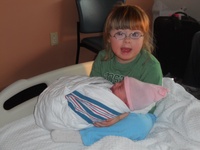 Number one: Penny’s teacher says, “Many of the other kids in
our class have never been around a child with a disability before.”

Number two: an acquaintance says, “I have someone for you to
meet. She has a son who is a lot like Penny. You know, different in the ways Penny
is different–he looks different like Penny does and he acts different like
Penny does.” (It took me a minute to figure out she meant that the son had Down
syndrome too…)

Number three: a therapist says, “You know, kids with her
diagnosis often have trouble with concepts like that. We need to consider
modifications to bring the activity down to her level.”

None of these statements are politically incorrect or
insensitive. All of them come from people who like Penny. All of them have her
best interests at heart. And yet I felt disoriented in each case. So I tried to
figure out why.

Maybe it was just motherly defensiveness. Maybe I just don’t
like the reality that my child is different from other children. Maybe I’m just
not willing to believe some obvious truth about who Penny is. But I think
there’s more going on.

What bothered me about these statements was that all of them talked about a specific person–my daughter–in very general terms. “Her diagnosis…” “Different like her…” even, “child with a disability.” I tend to think about Penny in terms of the specifics of who she is–the specifics that pose challenges (she tends to whine when she doesn’t get her way… she has trouble controlling her hands when there are new objects to touch…she sometimes pushes her friends…), and the specifics that demonstrate her strengths (she is learning how to undo buttons… she loves sounding out words… she rushes to console her baby sister…). When Penny gets placed into a general category, I don’t know who we’re talking about anymore. Peter compared it to seeing the whole world through a red-tinted lens. Take the lens away and you can still find the color red in specific places around the room, but the whole room is no longer red. The room becomes a place filled with color of all hues. Similarly, take away the lens of “disability,” or “difference,” or “diagnosis,” and you’ll still find instances of all three, but they won’t dominate the perception of the individual.

I was talking about the importance of talking with specificity as much as possible with another one of Penny’s teachers. In response, she told me about a woman in a wheelchair who visited their class recently. When the kids asked about the wheelchair, the visitor first said, “I was born with a disability.” Penny’s teacher was disappointed with her initial response because it didn’t tell the students anything specific–it just gave them a vague category called disability. But the visitor went on to tell them that she had problems with her back and that she was able to walk a few steps at a time but the wheelchair helped her get around otherwise. The specific response not only took the emphasis away from a vague category of disability, but it also helped the students understand the visitor’s situation.

Penny told me about this visitor a few days later. She hadn’t picked up on the word disability, but she told me the visitor was in a wheelchair because it helped her get around.

Of course there is a place for generalized language, but whenever possible, I want to talk in specifics. I want to understand particular strengths and particular weaknesses. I want to make room for each person to be a nuanced package of challenges and successes. And I want to have the eyes to see each one’s flashes of color.

read next post
What is Your Image of God? Where Does it Come From?
archives most recent
More from Beliefnet and our partners
previous posts