Perfectly Human: It Helps Not to be Afraid by Caroline McGraw 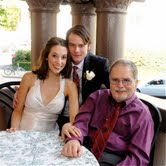 Caroline McGraw is currently serving as Program Director for L’Arche in Arlington. A graduate of Vassar College, she writes about ‘disability as opportunity’ at A wish come clear; her book of the same name is forthcoming. She is pictured with husband Jonathan McGraw and friend Michael Schaff on her wedding day in 2009.
There are times when I get swept up in the busyness of the day, or the obligations of the week. There are times when I forget why I’m writing, why I’m making myself vulnerable in the process. When I get to this place in my writing and my life, I remember what I learned from my friend and former housemate Michael, who lives at L’Arche Greater Washington DC. (L’Arche is a community of people with and without intellectual disabilities who create homes and share life together.)
Once at prayer-time, when he was asked, “Michael, what does it mean to be human?” he furrowed his brow and replied, “To be humble.”

I thought this reply was profound in itself–in choosing the word ‘humble’, Michael allowed me to form a connection. Human, humble…the root of both words is ‘hummus’, from the earth. From dust we have come, I thought, and to dust we shall return.

However, the line of inquiry–and Michael’s insight–didn’t stop there. When Michael was asked, “What does it look like, being humble?” he said, “Well. I don’t know. But I think it helps…to not be afraid of your faults.”

It helps to not be afraid of your faults.

I’ve thought of that line more times than I can count, and I’m still learning from it. I’m still sorting out its implications.

Part of what’s profound about Michael’s statement has to do with what he didn’t say, about what humility isn’t. Humility isn’t characterized by a devaluation of self. Instead, what Michael said implies that humility involves self-acceptance. It involves getting to know yourself intimately. It means digging deep to see your strengths, weaknesses and faults…and then overcoming the fear of what you find.

I should mention that Michael said what he said about humility with a tone of deep thought and consideration. He spoke not as someone who believes he has all the answers, but as someone who is working through difficult questions on a daily basis. Michael would be the first to tell you that living in community isn’t always easy. He’d tell you that some relationships are always going to be a struggle for him, but that the struggles make up the smaller part of the whole. “The bigger part,” he once told me, “is that we [is] friends.”

No matter what kind of a day he has at L’Arche, Michael knows that he is loved, by God and by the people around him. He has learned to trust in the love that helps him with his routines, the love that encourages him to set new goals each year, the love that asks him challenging questions at prayer-time.

It’s the freedom to grow in love that makes L’Arche a formative place. I was accepted to Princeton Theological seminary two years ago, but, after a peri
od of discernment, I chose to stay with L’Arche DC. Insights like Michael’s had begun to do their work in me. As Malcolm Gladwell wrote in Outliers, “… the values of the world we inhabit and the people we surround ourselves with have a profound effect on who we are.” I have found this to be true. The people who live here at L’Arche have been my greatest teachers in the school of becoming human.