How do you teach a child to make friends? 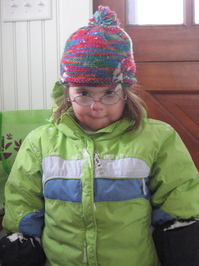 One of my earliest prayers for Penny was that she would have
friends. Back then, when she was an infant, I hadn’t read the studies that said
many individuals with intellectual disabilities experience depression as a
result of loneliness. I didn’t have statistics on hand that proved the need for
friendships as much as, if not more than, educational or vocational
opportunities. I just sensed that making friends would be harder for her than
for typical children. And so I prayed.

Since then, I’ve become all the more convinced that the
greatest struggle Penny will face is in the social sphere. Sure, she’ll have
learning difficulties and physical impediments and health concerns. But I
suspect that her need for friends will be her greatest challenge.

Part of the challenge arises because I don’t know how to
help her. When I was a kid, I ran around with other kids in our neighborhood. I
grew up in a 5,000 person town in North Carolina where the speed limit was 25
mph everywhere. (There were two stoplights on main street, but even there, I
remember a time when I was sitting in a car with my friend’s mom. The light was
red. She had the windows rolled down and chatted with someone else on the
sidewalk. The light turned green and she kept talking. It turned red again. We
drove at the next green.) The pace was slow and the town was safe and most
everything and everybody was within walking distance. The older kids played
with the younger ones because there weren’t that many of us. Even for a
bookworm like me, it was easy to have people to play with all the time.

Penny’s life is structured in such a way to make that easy, small-town give and take nearly impossible. She gets home from school at 4. There are no kids in our neighborhood who are her age. I don’t know the other moms from her school, and I’ve rarely put any effort into arranging playdates.

Yesterday, a teacher sent a note home about Penny’s bad behavior. My stomach lurched. The note described Penny repeatedly knocking down another kids’ blocks, and tugging at the other children’s clothes and generally misbehaving, even after reprimands and time-outs and all the rest. Sure, it can be attributed to a new baby, disruption in her schedule, fatigue. But I’m certain that what’s really at stake here is a desire to make friends, and trouble knowing how to do so.

It’s one of the few times I’ve felt helpless as a mom. A part of me wants to make a rule for myself that we’ll start having playdates twice a week . But I know the barriers–with whom? At 4:00 when Penny is exhausted from school and we’ve got a little over an hour before dinnertime? With a new baby in the house? It’s not going to happen.

So I’m brought back to my knees.

I prayed this morning, again, for friends. It’s a short term hope, but a long term prayer. I want Penny, over the course of her lifetime, to know the love of one or two faithful and good friends.

And then, at ballet class this morning, one of the moms wrote her name and phone number on a napkin. “Why don’t you call us so we can have Penny over for a playdate? My daughter would just love that.”

Maybe God will take care of this one after all.

Perfectly Human: My Jackson by Mica May
archives most recent
More from Beliefnet and our partners
previous posts