God And The Good Parent, Part II: If God Were Like Santa, This Would Be Easy

As I wrote yesterday, I have a complicated relationship with God. Have had for a long time. But I’d always been comfortable with that – until I had kids…

I wrote yesterday that I want my
children to know God, and that I want them to know God as I did – personally, intimately, in a relationship of faith rather than skepticism.

I do not want this because I

think that it will make them morally superior beings. I do not want this because I believe that human beings cannot be good without God. I do not want this because I want to secure
them a place in Heaven. I don’t believe that faith confers moral superiority; I don’t believe in
security-patrolled Pearly Gates; I do know that it is possible to be
‘good’ without God (but please do not ask me to unpack that statement
here.) I’m not looking for spiritual guarantees or moral fail-safes, if
such things even exist.

I want this because I want my
children to have a meaningful choice in the matter of whether or not to
embrace faith. And I don’t think that they will really, meaningfully,
have such a choice if they are not exposed to faith from an early age.
It’s all well and good to take a principled position against what might
be called an indoctrination of faith, and to insist that exposure to
religion is something best left until children have the maturity of
reason to critically evaluate organized religion, but that position
pre-determines its own end. If faith is set aside in childhood, and
reserved for later examination and evaluation under the bright lights
of reason, then it’s doomed from the start. Reason is antithetical to
faith, especially in its first age, when it is clung to like a brass
ring, when it causes us to chortle with delight at knowing, to thrill at being let in on the world’s secrets (Chrissy is still a baby because she still believes in Santa, right Mommy?) It
is only the strongest, most hard-won faith that does not pale at the
approach of reason. Reason shatters faith, exposes belief as simply
that – belief.

Who
among us would ever have given Santa Claus, the Easter Bunny or
Tinkerbell a second thought if we had only discovered them in the age
of our reason? We might be amused or entertained by them, but we could
never take them seriously. But when we meet Santa Claus in the
innocence of our youth, we give him a chance. And we’re well-positioned
to decide, when we’re ready, whether or not we want to continue
believing in him. If we never believed in Santa as children, we can’t
be said to have ever made the choice to not believe.

So it is, I
think, with God. I’m not suggesting that God is a character of myth or
fantasy, as Santa is generally understood, although many have argued
and do argue that God is exactly that. What I am suggesting is that
belief in God usually (not always – people do sometimes ‘find’ God and
religion later in life) requires exposure to the real practice of faith
before one learns that faith is, or appears to be (appears to be), contrary to reason. It requires having someone say, emphatically, insistently, that yes, Virginia, there is a God. It requires, yes, some sort of indoctrination into faith during childhood. Saying yes
to religion. Talking seriously and respectfully about God and church
and faith. Reading Bible stories. Attending church or synagogue. Saying
prayers. Watching Little House on the Prairie. Some or all or any combination of the above.

The
problem? I no longer do these things, for the most part. My faith, such
as it is, is quiet, private. It is something that I subject to scrutiny
every time that I pull it out for inspiration or for comfort. It lives
in the strange space that I’ve carved out in my soul for those things
that I fear and love and am confused by and ever will be confused by.
I’ve made my choices, it seems, if living in a state of such critical
ambivalence can be regarded as a meaningful choice.

But I don’t
want to make that choice for my children. So how do I create the
opportunity for my children to have a choice, a real choice? For them
to really, meaningfully explore the option of faith, and take that
option seriously? Do I suck it up and re-enact the rituals of the
religion of my own childhood, and swallow the hypocrisy as
well-intended? Or is there another way?

How do you find your way when the path is dark? How do you lead your children, when your own way is so obscured? 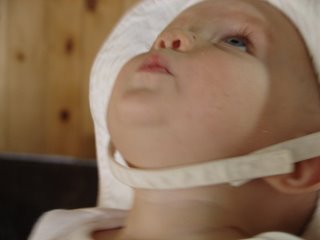 Coming soon: how my father’s death has complicated this issue for me, and how I hope to find my way through the darkness.

Amended from an original post published at Her Bad Mother, July 2006.