On the main website I wrote an article about Steven Rosenbaum, the director of the 9/11 video for Live’s song “Overcome.”  If you haven’t seen it, check it out here.  I was pretty happy with it, which doesn’t happen often!  As usual, there was some stuff left on the cutting room floor, so I thought it would be interesting to share it here.

This bit picks up after Steven and crew had shot the video and it was showing on MTV and VH1.  They didn’t yet know if it was alright for them to do it, and the response to it was unprecedented.  Steven described it in great detail.  Enjoy!

“Then 2 or 3 more days went by, and I remember people in the office asking “did we have permission to do that”?  Since it wasn’t our music, and I said “you know what, I don’t care, I had to get it out, I had to say it.”  So, three days go by and I get a call from the manager of Live, and “I said here it comes, you know we’re going to sue you.”  Their manager paused for about 4 seconds, and he said “we’re just so honored that you used our music.”

“Another week goes by and he calls back and he says they want to shoot a video using the footage in LA, and I said “no.”  He said “Let me get this straight you can use our music but we can’t use your footage?”  I said “If Ed wants to record a song about the trade centers he has to come to NY.”  He called back an hour later and “alright we’re going to be on a plane today.”  He flew to NY, we walked down the West Side highway and we brought a boom box so that he could sing to the pre-recorded music.  There were people from the label and us, just this big group of people.  We got as far as the sanitation trucks [near Ground Zero], and the police officer stopped us, and said you guys don’t have press credentials.  [After some negotiating] Ed, me, my wife who was filming, and one other were allowed in.  He left behind all the handlers, all the agency people.”

A few minutes later we are standing with the buildings in the background in a place that people weren’t allowed to go at that point.  In front of the burning smoking ruins Ed sang the song a capella.  It was incredibly haunting, incredibly beautiful.  You know, it is one of those stories 9/11 is a terrible, terrible thing.  Nobody would wish that it happened, but in addition to that, I met some amazing people, Ed, he’s one of them.  He was really frankly thankful that I called him out and said don’t sit on the west coast.  He did the right thing, got on a plane, and it wasn’t a time when people were looking forward to air travel.”

Really powerful stuff!!  Thanks again to Steven Rosenbaum for being generous with his time and extremely helpful.  Great guy!! 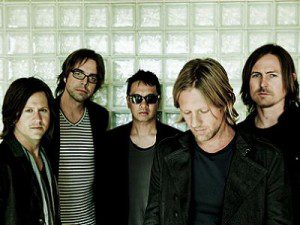