Ah, the world of “reality” television.  This weekend the three remaining American Idol finalists (sadly NOT including James Durbin) returned home to great their fans and to pose at various media circus-type events.  For Garner, NC native Scotty Mcreery, one of those planned events was throwing the first pitch at the North Carolina State-Florida State baseball game.  Scotty is a huge fan of the Wolfpack, and the first pitch was supposed to be a part of his homecoming footage that will air on this week’s Idol.

One small problem though – there was no baseball game.

That’s right, if they air a first pitch on Idol then it wasn’t real.  Storms plowed through the Raleigh area Saturday, raining out the game and disappointing fans of both the Wolfpack and Scotty.  A silly thing like reality has never stopped American Idol before, so they did what comes best – made something up.  During a short break in the rain Scotty threw the “first pitch” of the “game” for the fans who showed up.  Ah, reality television, how little you are actually based in reality.

Who knows if the footage will show up on this week’s Idol, but until then you can enjoy watching Scotty slip n’ slide with the Wolfpack baseball team! 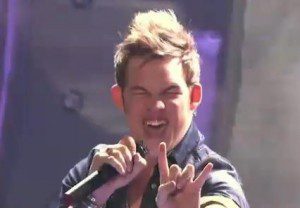