That’s right, we are down to nine contestants!  Tonight the final nine performed songs by rock n’ roll hall of famers.  This is a new category for Idol, and one that I welcome with open arms!  So who cracked under the pressure, and who soared to new heights?  Let’s find out!

Jacob Lusk – Jacob was originally going to sing “Let’s Get It On.”  It is probably a good thing that he didn’t, as women everywhere may have exploded.  Shoot, I might have exploded.  Instead, he went with the Michael Jackson classic “Man in the Mirror.”  Y’all know I dig Jacob, but this week it would have been really fun to see him do something a bit different.  He still killed the song though.  One of the instrumentalists for the performance was a co-writer of the song, and in a really nice touch Steven Tyler took the time to recognize her.  It was a great moment that really illustrated the different perspective that Steven brings to the show.  Props!

Haley Reinhardt – After weeks of comparisons from the judges, Haley finally took on a song popularized by Janice Joplin.  She sang “Piece of My Heart,” which was originally performed by Emma Franklin.  No, Emma is not in the Rock n’ Roll Hall of Fame.  One step forward, and two steps back Idol!  As far as the performance goes, I’ve been wanting to hear her do a rocker, and this week I got my wish.This was by far my favorite performance from Haley.  It was fun, aggressive, and well sung.  You go girl.  She needs to take on rock every week.

Casey Abrams – Casey has already shown his Creedence Clearwater Revival streak, so “Who Will Stop the Rain” was a natural choice.  First of all, he played an upright bass for this performance.  I never thought I would see anyone on American Idol play an upright bass.  Second of all, he smiled, brought the gruff vocals, and gave a truly moving performance.  I don’t think he scared America this week, not at all.

Lauren Alaina – Aretha Franklin has been given a couple of stirring tributes this year, and Lauren’s stirring rendition of “A Natural Woman” unfortunately wasn’t one of them.  She sang a difficult song and did it well, but it wasn’t incredible by Idol standards.  For Lauren though, it was a solid moment and one that will easily carry her into next week.

James Durbin – While known for being a rocker, James instead chose “While My Guitar Gently Weeps.”  I wish it had been better.  There were pitch problems throughout and it really plagued the performance.  I am glad he went for a softer performance, but I think the song choice was pretty poor.

Scotty Mcreery – Scotty took on his childhood idol Elvis.  While it was a fun show and he did a great job with the crowd, it wasn’t a great performance vocally.  I think the style could really work for him but he needs to iron out a little bit of the southern draw for rock n’ roll.  Par for the course tonight, the judges thought it was incredible.  They think everything is incredible though, so that isn’t surprising.  Simon Cowell, you are missed.

Pia Toscano – Pia brought out “River Deep, Mountain High” by Tina Turner for the promised upbeat performance.  While she was doing something out of her wheelhouse, Pia owned the song and showed why she is one of the best singers in this whole competition.  While the ballads are always impressive, this may have been one of the top performances she has dropped on America.  This performance illustrates why the judges need to actually be judges, because she deserved more praise than many of the other performers received.  Unfortunately, that praise had already been given out.  For shame!

Stefano Langone – “When a Man Loves a Woman” is an awesome song.  If Stefano wasn’t such a cheeseball he would be awesome.  That said, he sang the song really well and will probably be around next week.  I’m just not his audience, ladies, sorry!  He was the only performer to get actual criticism from any of the judges tonight, though.  Thank goodness that actually happened.

Paul McDonald – Johnny Cash American Idol time!  I wonder what Johnny Cash would have really thought about American Idol?  This was a bit of that real country that I’ve been touting this week on the blog, and I was mighty surprised to find that Paul really excelled with this style.  This was the best (only?) dirty country performance in Idol history.  Paul needs to bring more of that each week!

Tonight Paul and Pia brought my favorite performances, while Casey gets extra points for playing an upright bass.  I think Lauren may be in trouble this go around, but we’ll see what happens tomorrow night!

What did you think America? 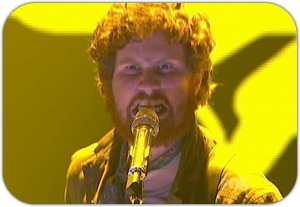 Is Casey Abrams Scaring America?
archives most recent
More from Beliefnet and our partners
previous posts