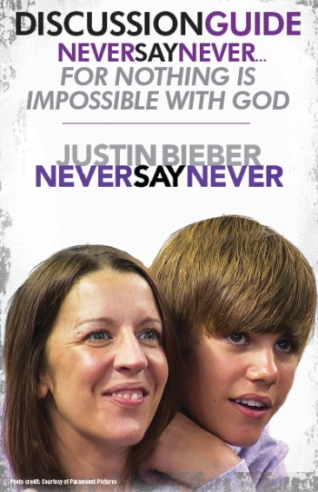 Here it is folks – The Justin Bieber Bible Study: Never Say Never… For Nothing Is Impossible With God.  This short booklet with a poorly worded title was sent to youth group leaders as a part of the promotional campaign for the recently released Justin Bieber film Never Say Never.  Clearly they had been reading my blog and knew that youth leaders are running out of things to do.

This promotional tactic is nothing new.  The trend began with Mel Gibson’s The Passion and has been used many times since.  Much like the material for that film this discussion guide provides questions, Bible readings, and, of course, information on how to arrange a special group showing of the film.

The only difference is that The Passion was about Jesus and Never Say Never is about Justin Bieber.

I readily admit that I am skeptical of the need for a discussion guide on this film.  But, I am willing to approach it with an open mind.  After all, I don’t aim to doubt the faith and sincerity of Justin or his mother, who likely supported this with the best of evangelical intentions.  What I do doubt though, are the intentions of others who stand to profit from the film.  Since it isn’t possible to know whether Justin even contributed to this or not, any criticism I may make isn’t aimed at him.  He is only 16 and besides, I am very scared of teenage girls.

Check back in for Part 2 where I examine the opening, including a letter from Justin’s mother and an introduction that tries really hard to convince you that this is a film about faith.  I’ll be discussing whether it succeeds or fails miserably.  See you then!

What are your reactions to the Justin Bieber Bible Study?