The pandemic has changed the way a lot of families are splitting up their household chores, and with the extended time being spent at home, more men are saying they have actually split household tasks evenly with their wives, but their wives are saying it’s not quite that even according to a newly released survey.

The 2020 American Family Survey Report, conducted by Desert News, focused on collecting data from married couples who also had children. The study consisted of married couples across different categories such as high and low incomes, and race (Black, White, Hispanic). The study revealed that men were more satisfied with the division of household tasks than their wives were.

Now, this wasn’t to say that the wives were terribly dissatisfied with how household tasks were divided. In fact, the study noted that the disagreement between the couples wasn’t about one trying to undermine the contributions of another or suggest one spouse did more than the other.

Which, given the current times and circumstances stemming from the coronavirus pandemic, their frustrations around this generational tradition, is even more justifiable. Now that many families are turning their homes into remote offices and learning environments for their kids , it levels out the playing fields much more when it comes to who is physically available to help out around the home. Most couples are having to figure out how to manage their own work, be able to support their children with virtual schooling, and take care of household tasks. This alone is a lot for any couple and when it comes to deciding who should be doing what, it can definitely cause a debate.

The study also showed that even though men were more likely than women to say they were satisfied with the division of household tasks, men were also more likely than woman to report they felt like they were struggling to create balance between home and work life, maintaining order with their kids, and even said they felt like they were failing as a parent. But this wasn’t to say women didn’t feel those same stresses as well, men were just more public with disclosing it.

Everyone is still finding their way to adjust to what has become the new normal, and although it has presented its own set of challenges, couples who are able to work together as a team through those challenges have proven to become a stronger unit. 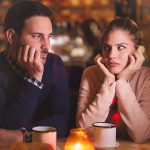 A new study shows four out of ten U.S. adults are living without a romantic partner or spouse.