Americans are no longer putting a ring on it.

The US marriage rate fell to its lowest level on record in 2018, federal stats released Wednesday show.

New figures from the National Center for Health Statistics reveal the nationwide marriage rate fell 6 percent from 2017 to 2018, with 6.5 new unions formed for every 1,000 people.

The figure marks the lowest rate since the US government started tracking such data in 1867, Sally Curtin, the report’s lead author and a statistician at the federal agency, told the Wall Street Journal.

“Millennials are in peak marriage years, their 20s and 30s, and it’s still dropping,” Curtin told the newspaper. “This is historic.”

There’s no clear reason for the decline, Curtin said, but she expects the ongoing coronavirus pandemic to further drive down the number of Americans getting hitched, citing financial insecurity and restrictions to both travel and social events.

“A lot of it is the economy, and the extent to which Covid has a lasting effect on the economy, it might affect family formation,” she told the Wall Street Journal.

The data reveals that getting married “has been a long-standing, declining trend since the early 1980s, showing that marriage is less central to the lives of Americans [than] it used to be,” Curtin told NBC’s “Today” show.

This article was syndicated from the New York Post. 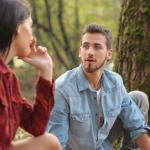 Can Men and Women “Just Be Friends”?
archives most recent
More from Beliefnet and our partners
previous posts

The Secret to a Stronger Marriage: Focus on Your Wife This Mother’s Day

To ensure a strong and happy marriage, a husband must give his wife honor and recognize her value. This year on Mother’s Day try focusing on your wife and letting her know you truly cherish her and the value she adds to your family. Throughout the year you may forget just how valuable she is, […]

The COVID-19 pandemic is leading to a surge in online dating. Even with the world at your fingertips, your physical location within the United States can play a huge role in your likelihood to find a romantic partner. WalletHub compared the 50 states across 27 key indicators of dating-friendliness to develop a list of the […]

The pandemic has changed the way a lot of families are splitting up their household chores, and with the extended time being spent at home, more men are saying they have actually split household tasks evenly with their wives, but their wives are saying it’s not quite that even according to a newly released survey. […]

Divorce Rates on the Rise in Coronavirus Quarantine

Quarantine has changed the dynamic of many couple’s marriages, and with the added time couples have at home, it’s become a driving wedge, leading some to consider divorce. Politics, money, chores, kids, lack of intimacy, and boredom have become the reality of most households and everyday quarantine stressors. This has couple’s reconsidering how they feel […]