Well that didn’t take long.
Rabbi Michael Lerner, editor of Tikkun and founder of the Network of Spiritual Progressives, has the honor of being the first member of the “religious left” to lambast the new President.
Lerner is outraged at the selection of Rahm Emanuel, whom he says has a “long history of militarist ideology.” Noting that Emanuel pushed for conservative Democratic congressional candidates, Lerner predicts that Emanuel will “almost certainly be protecting Obama from all of us spiritual progressives and those of us who describe ourselves as the Religious Left.” In short, Lerner says, “we may be in for lots of disappointments.”
The full missive from Lerner here:

Election night tens of millions of us wept for joy. We sang the songs that we had sung as young men and women when we were fighting segregation in the south and then in the North, some of us being beaten, others jailed, some even killed. For the first time in three decades we could sing “Imagine” and “The Times They are a’Changing” without feeling that we were holding onto utopian fantasies that had been
buried by the cynical realists who have shaped public discourse.

How exciting to believe again in the possibility of America as the potential embodiment of our ideals for social justice, peace, and ecological sanity. We could hardly believe our own eyes-we were living through the rebirth of a nation and its attempt to heal its racist past.
So no wonder why many of us were shocked and deeply disappointed when we learned on Thursday that Congressman Rahm Emanuel was to be the Chief of Staff in the Obama White House.
Emanuel, for those who don’t recall, was the Congressman who traveled the country in 2006 finding “suitable” candidates in “swing districts” to run against Republican incumbents, and in many instances he succeeded. But his theory of how to succeed was destructive: he sought the most conservative possible candidates in each district, insisting that local Democratic Party organizations reject more liberal candidates who, he feared, might not win.
There were many among the House Democrats who deplored this tactic. The main issue on the mind of the electorate was the war in Iraq, and public opinion had moved so far in opposition to that war that the Democratic leadership in the House was pushed to proclaim that it would cut off funding for the war if Democrats won control of Congress. Well, the outcome was that Democrats did win control, but since the candidates that Emanuel picked were more conservative and militarist than the mainstream of the Party, they were not reliable allies when it came to voting against war funding. Instead of cutting fund for the war, Nancy Pelosi’s House increased the funding, explaining that they had to appear “responsible” in order to solidify their control of Congress in 2008..

Clever? Not for the people, Americans and Iraqis, killed or wounded in the meantime.
This was no mistake on Emanuel’s part. Rahm Emanuel has a long history of militarist ideology behind him. His father was a member of the ultra-right-wing terrorist organization Etzel that killed British civilians as part of their anti-British struggle in Palestine in the 1940s. Emanuel, himself a citizen of Israel as well as the United States, has been one of several Congressional leaders enforcing the “Israel Lobby” concensus on the Democrats, in the process shutting out the peace voices that believe Israel’s security would be better served by the U.S. putting pressure on Israel to end the Occupation, move the Wall to inside the pre-67 boundaries, and remove the settlers from the West Bank or tell them to live there as Palestinian citizens.
It’s not just the pro-peace and reconciliation forces that are unlikely to be given a serious hearing in a White House in which Rahm Emanuel controls who gets to talk to the President. Emanuel will almost certainly be protecting Obama from all of us spiritual progressives and those of us who describe ourselves as the Religious Left-so that our commitment to single-payer universal health care, carbon taxes for environmental protection, a Homeland Security strategy based on generosity and implemented through a Global Marshall Plan, will be unlikely to get a serious hearing in the White House.
When these issues were avoided by Obama during the campaign, most of us spiritual progressives told ourselves, “He’s just being political, but once elected he’ll reveal himself committed to the values that he whispered into our ears privately over the course of the past many years.” The Rahm Emanuel selection is an early warning that the peace and justice agenda dropped by Obama after he won the Democratic nomination may be permanently on hold, and the progressives themselves may have to settle for “access” and flowery words at an inauguration address rather than the substance of change.
For many of us, just the fact of having a brilliant young black man in the White House will be such a healing experience that we won’t care about this newly emerging reality: unless Obama creates some other path to access and to public input into his policies by those of us who helped build his electoral success, or unless we organize to do so outside the framework of his campaign organization, we may be in for lots of disappointments. 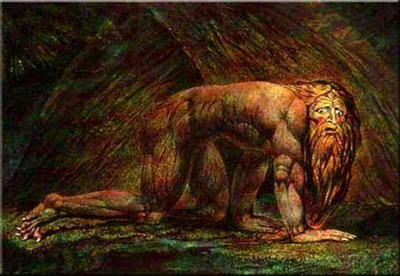 Obama = Nebuchadnezzar?
archives most recent
More from Beliefnet and our partners
previous posts