“But the Helper, the Holy Spirit, whom the Father will send in my name, he will teach you all things and bring to your remembrance all that I have said to you.” – John 14:26

In this verse from the Bible, Jesus tells us about the Holy Spirit – a “helper” that God is going to send, who will literally live inside of us and teach us the ways in which we should go.

It was amazing news to the people at the time, because it meant they would no longer be alone.  From that point onward, we would continually have the guidance of God through the Spirit and be able to call on His help whenever we needed.

I’ll have to admit… being on this side of the picture, I can’t even imagine what it was like in the days before Jesus, when we didn’t have such a direct line to God.  So, I am beyond grateful for the gift of the Holy Spirit.

But, it’s funny, because even though we, as believers, know that we have the help of the Holy Spirit at all times, its easy to forget and try to figure out our way on our own.  Whether it’s what job we should take, where we should live or who we should marry… we often put the weight of the decision on our own shoulders and forget to wait on the prompting of the Holy Spirit.

The Spirit is not a “Magic 8 Ball” that we can just demand answers from whenever we like.  But, we can (and should!) ask for His help and guidance and wait for His direction before we move.

And this doesn’t only apply to the “big” things in life either.  We can actually follow the direction of the Holy Spirit on things as seemingly-trivial as what gas station to go to or what store to shop at.  Once, after my credit card had been compromised at a gas station pump (I never found out which one), I felt an inner prompting not to go to a particular station when I needed gas.  Of course, I didn’t know 100% sure that was where it happened, but the prompting inside was strong enough that I decided not to take a chance.

And then, there was the day that I needed my car to be inspected.  I had taken it to a familiar service station, only to have the employees “accidentally” knock something out of place on my car, which made a light come on saying the car was not ready to be inspected.  The only way to remedy it was to drive for at least 50-100 miles to clear it.  So, I drove around aimlessly, coming back to the station twice, only to be told it still wasn’t ready.  Frustrated, I went home and decided to try again the next day.  But, the next day didn’t seem to be going any better when the first two stations I tried (that were closer to home) were 1) mysteriously locked up and 2) backed up with over an hour wait.  Feeling frustrated and confused, I sat in my car and said out loud, “Ok, God, you tell me which station YOU want me to go to!”  It was something God had been teaching me to do more and more – wait on His direction and ask for His guidance.  So, I continued on… feeling led down one particular road where my car dealership was.  Only, as I approached it, I felt like I should keep going.  I did and just a short ways past it, I spotted a shop off on the side of the road that I had never realized before.  I immediately felt a prompting to go there, so I did.  After explaining the situation about the “not ready” light to the man behind the counter, he said he’d come out and check it, although it usually wouldn’t clear for at least 2-3 days.  But low and behold, when he checked it, it had miraculously cleared.  So, I told him to go ahead and do the inspection.  Only 10 or 15 minutes later, he said he was done and told me to come outside, bringing my stuff with me.  When I inquired about still having to pay, he said that he had been having a really bad day and that when he sat in my car, a song had come on the radio station that played at his dad’s funeral.  And that just sitting in my car had changed his whole day, so he wasn’t going to charge me.  Interestingly enough, I usually turn down my radio or shut it off, so no one is “offended” by my Christian radio station, but this time I didn’t even think about it!

The way that I was led to his station and the blessings that both he and I got out of it, were just another example of the amazing things God can do when we are still and follow the prompting of the Holy Spirit.

Remember, you are never alone.  God is always with you and His Spirit will show you the way.  But, we have to be willing to be still enough to wait on Him.  To listen for His “voice” and to be brave and obedient in following His direction.

It’s not easy and it will take some practice, but once you start to recognize and understand the prompting of the Holy Spirit, your life will be filled with some pretty amazing “God stories” of your own! 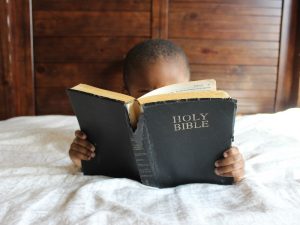