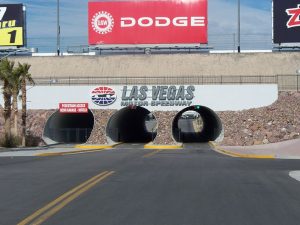 Have you ever seen the traffic lights above the entrance to a tunnel?  Typically, you see them on the infield tunnels at speedways, but I’m sure they use them other places too.

The point of these lights is to make sure that traffic flows smoothly each way and that no one ends up going the wrong direction.  Since the tunnels can be used to send cars in or out at different times (for instance, both tunnels taking traffic IN to the speedway before a race and both tunnels taking cars OUT of the speedway after a race), it is important to have lights that indicate which direction drivers should be going, instead of relying on them to figure it out for themselves.

They probably prevent numerous accidents and stranded motorists who would otherwise have to figure out how to back all the way up to get out (while staring into the eyes of annoyed motorists coming at them the other way).

But recently, while at one of these speedways, I saw these lights in a whole new way.  They reminded me of how God does the same thing in our lives – holds us back at times with a big ol’ red “X,” even if we’re not sure why at the time.

Just like we wouldn’t want to start driving our car into the tunnel, unable to see if another car is headed toward us, we don’t want to forge ahead carelessly without getting the “go ahead” from God.  He may be able to see something coming that we can’t and is looking out for us when He tells us to wait.

Or it may be that we’re not ready yet.  It may take longer than we expect to go through the “tunnel” in our lives and He wants to make sure that we are prepared for the journey first, before we get in there.

God wants us to stay in His will for our lives – following along with the flow, not going against the traffic.  So, wouldn’t you rather wait until He tells you the coast is clear and it’s time to move, rather than to start forging ahead on your own timing, only to realize that you’ve gone the wrong way and have to back up and start over again?

We trust those little traffic lights without questioning if they’re right or if they know what they’re talking about, so why not try doing the same thing with God?  If you feel Him giving you a red light on something, trust that there’s a reason and wait until He gives you the green light.

He’ll make sure you’re prepared and the path is straight.  So, when He says go, put the pedal to the metal and GO!