It Never Hurts to Try 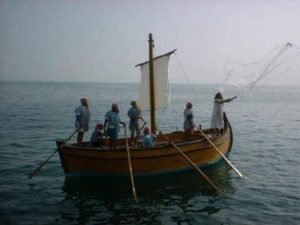 In John Chapter 21, we see the disciples of Jesus coming back toward shore after a night of unsuccessful fishing.

In the morning, Jesus appears on the shore and asks them if they’ve caught any fish.  They respond no, they didn’t catch anything, to which Jesus replies by telling them to throw their net on the right side of the boat and they will catch some (John 21:6).

Even though they had probably already tried that several times before, they follow His direction and end up catching so many fish that it’s hard for them to even tow the net in!  Although the net never breaks.

Then, they join him on the shore where they enjoy a meal of fish and bread.

So, what can we learn from this simple interaction between Jesus and His friends?

That it never hurts to try.

So often, we go through life listing all of the reasons why we’re not qualified to respond to God’s calling on our lives.  We’re not talented enough, bold enough, brave enough… we don’t have enough money, enough time, enough resources.  We won’t do it right… we’ll just end up ruining it even if we try.

But the problem with that line of thinking is we’re putting all of the responsibility on ourselves.  We are leaving God entirely out of the equation and forgetting that when He calls someone to do something, He prepares them and equips them to do it!

He will give you the skills, the time and the resources you need – all you have to do is make yourself available and be obedient to His call.  He will bless your efforts that are in line with His will, just like He did with the fishing lines that were lowered on the right side of the boat.

Jesus gave them a direction, they followed Him and He blessed it.  They didn’t question His direction or list all the reasons why it wouldn’t work (which they could have, seeing that they just spent all night fishing and hadn’t caught a thing).  They just give it a try, in faith and in trust.

If God is calling you to do something for Him, don’t hesitate and list all of the reasons why it won’t work or you’re not capable.  Follow His direction – let down that fishing line – and remember that God will bless the right actions and produce the right results.

All you have to do is try.

read next post
Expectation vs. Worry: There's a BIG Difference
archives most recent
More from Beliefnet and our partners
previous posts