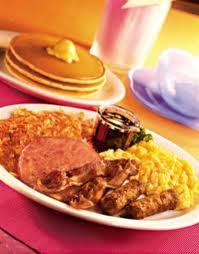 It’s a guy thing.  I’ve never quite understood most of this passage of scripture found in John 21. You remember the incident that happened after Jesus’ resurrection.  First, the breakfast on the beach.  I think Jesus  invented going out to breakfast that morning.  Hey, what’s a good breakfast?  One egg and a piece of toast.  That’s a satisfying, filling breakfast.  How much does it cost?  $.35?  And it takes five minutes to prepare for a family of five.  (Trust me!  I’ve timed it hundred’s of times.)  That breakfast would satisfy almost all women.

Oh, no! Men want the Denny’s Grand Slam! What does it contains? 17 pieces of bacon, two slices of ham, fourteen scrambled eggs, 25 pancakes, and two biscuits slathered with gravy.  Enough food to feed Napoleon’s army for a week.

Women like to go out to lunch–not breakfast.  A salad, some iced peach tea and a four-inch piece of Kill-Me-with-Chocolate cake that you share with three other people.

Think about it. Everything about this passage in John 21:1-17  must be a guy thing.  Guys, you’ll love reviewing it.  Women, listen and learn.

Reviewing all of the things that had happened:

It was simply too much.  Peter and the disciples were on overload.  Peter said, “I’m going fishing.”  Fishing?  Really, fishing?

It’s got to be a guy thing.

Women, we would go shopping or for a quiet walk in the park to clear our heads.  But Peter wanted to go fishing.

And–uninvited–all the men wanted to go with Peter.  Uninvited, the men all piled into their own vehicles.  They simply invited themselves to go fishing.  Now, women love going places with other women.  In our favorite restaurant, we will even go to the public bathroom together.  But WE WAIT TO BE INVITED.  These men invited themselves.

It was the next morning and they had fished all night and caught nothing.  Fishing?  All night?

We won’t even go there because  it’s a guy thing.

Then they saw a man on the shore that they didn’t recognize and the man asked them, “Have you caught anything?  Throw your nets on the other side of the boat.” 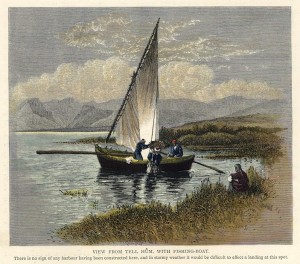 Of course, the men did it. Why?  I don’t know, except could it be because another man told them to do it?

Women would be questioning, “The other side?  Has he lost his mind?  Who is this strange man? I don’t even have to walk to the other side of this boat.  I can toss the net on the other side standing in the middle.  Ladies, does this make sense?”

Of course, the men did it and after filling the net with fish, only John realized that Jesus was the man on the shore.

Sorry, Men, but you sometimes don’t recognize the most obvious things.  After observing men and their fish for decades,  I think these men were so concerned about getting the fish into the boat that their brains went into tilt mode.  If this had been a group of women, they would have immediately known that it was Jesus on the shore.

Then Peter put on his clothes to jump into the water.  Two things. First, I’ve learned that men often take off their clothes to do work when they are alone with only other men.  Women never do that.

Second,  Peter PUT his clothes back on to jump into the water.

It’s got to be a guy thing.

We, women, would take off our clothes to jump into the water.  “Hey, I’m not getting these sandals wet.  And do you know how long I had to save to get this sarong?  Girls, meet me at the edge and BRING all my clothes!”

But when they got to the shore, Jesus had breakfast ready for them.  He had cooked it himself .  Jesus  invited the tired and hungry fishermen/disciples for breakfast.

Then, after they had eaten,  Jesus gave Peter the opportunity to confess to Jesus that he loved Jesus three times.  The exact number of times that Peter had denied Jesus.

God is always gracious and loving to us.  No matter how bad our sins, he wants to forgive us and set us free.  Jesus came to the disciples where they were; and he showed them that he loved them.  He was especially gracious to Peter.  He even gave Peter the opportunity to make his bad mistake right.