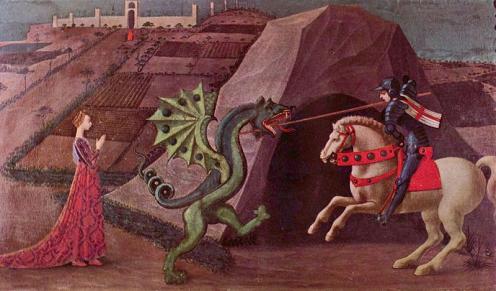 In my last blog post I addressed some questions of logic that had been raised on a popular anti-evolutionary blog, and how scientific arguments are often caricatured to make them appear to be committing logical fallacies.

In this post, I examine another example of the misuse of logic and evidence by the opponents of evolution. I want to suggest that anti-evolutionists don’t actually use evidence as evidence. Rather they use evidence as rhetoric–a debating tool designed to score points in arguments. Evidence is not, by these defocused lights, a pointer toward truth. Rather evidence is a distraction, undermining truth.

There are several examples we could look at but I think one of the best relates to the dinosaurs. I was reminded of this recently when I had dinner with an enthusiastic young earth creationist and witnessed firsthand how comfortably he wielded the arguments against the well-established scientific consensus that dinosaurs went extinct millions of years before humans first appeared.

There are four arguments that creationists use against the scientific picture of dinosaurs, all of which came up in my dinner conversation:

In a discussion about evolution, the age of the earth, or even the general reliability of science these “arguments” are launched into the conversation as if they prove something significant that scientists don’t understand. But most people wielding these arguments have no clue about them. Consider the following:

All four of these arguments circulate with vigor in anti-evolutionary circles. I have heard them many times, most recently over dinner. Web sites proclaim them. The “true believers” that wield them as arguments against evolution, however, don’t understand them and are blissfully unaware that they are simply irrelevant.

The most peculiar feature of this phenomenon, however, is the selective endorsement of science. If a scientist reports that he has found evidence–like soft dinosaur tissue–that dinosaurs are not as old as we thought, that scientific conclusion is treated respectfully by the anti-evolutionists because it agrees with their interpretation of the Bible. But when those same scientists report later that there may be a better explanation for the data–one that is compatible with evolution–this evidence is rejected as a part of the “conspiracy” to suppress the evidence against evolution. Science, it would appear, lacks integrity, except when it is undermining evolution.