Science and an Incarnational Approach to the Bible 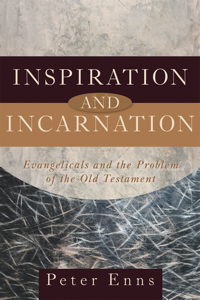 Every Friday, “Science and the Sacred” features an essay
from a guest voice in the science and religion dialogue. This week’s
guest entry was written by Peter Enns. Enns is an evangelical Christian scholar and author of several books and commentaries, including the popular Inspiration and Incarnation: Evangelicals and the Problem of the Old Testament

, which looks at three questions raised by biblical scholars that seem to threaten traditional
views of Scripture. This is the first of a multi-part series.

It is no secret that developments in modern thought have challenged traditional notions of the Bible–not simply how to handle a verse here or there, but how to think of the Bible as a whole. To say, for example, that the Bible is inspired or the revealed word of God is fine, but it does not really address the situation at hand, for it leaves unaddressed how we are to think of inspiration and revelation in light of these recent challenges.

Two of these challenges crystallized in the nineteenth century and are still very much with us today. In biblical studies, texts from ancient cultures surrounding Israel began to be discovered and deciphered, and these texts bore striking similarities to foundational texts of the Old Testament. The first and still most famous of these discoveries are stories of creation and the flood from ancient Mesopotamia that are older than the biblical account. Although there are important differences between the Genesis stories and these other texts, it quickly became very hard to escape the conclusion that the authors of all of these texts–Genesis included–share a conceptual world about the nature of reality; they “breathed the same air.”

In subsequent generations, as archaeological studies shed more light on the ancient Mesopotamian world, the Old Testament came to be seen more and more as reflecting the environments in which those writings were produced. An entire field of inquiry arose called “The Bible and the Ancient Near East,” or similar designations. It was clear that the Old Testament could be profitably set in its ancient settings, and doing so would yield a deeper understanding of the Bible and its world, even if it challenged some traditional views. This is not to say that the Old Testament is “just like” other ancient writings or could be understood merely on the basis of these comparisons. No two writings from antiquity can be so closely equated, and certainly the Old Testament has many distinctive marks. But the pressure point was the striking similarities.

It is beyond any reasonable debate that the various writings of the Old Testament reflect the ancient contexts in which they were written. The interconnectedness of the Bible and the ancient world can be both confirming of Evangelical instincts regarding the Bible, but also presents very important challenges concerning the uniqueness and historical content of the Old Testament, Genesis 1-11 being a particularly famous example. However one may think through the specifics of these challenges, the more basic point should not be lost: any move to articulate very important concepts like inspiration and revelation cannot blissfully ignore the circumstance described above, but rather must account squarely with the “ancient near eastern way” God chose to speak.

A second challenge to traditional notions of the Bible in the nineteenth century is well known to readers of this blog: Darwin and evolution. Here we have a way of looking at human origins that was persuasive to scientists, spread quickly, and, in tandem with advances in geology from the previous century, called into serious question whether Genesis 1-11–especially creation, the flood, and age of the earth–has any historical value whatsoever.

It was a tough century for Christians. Challenges were coming from the halls of academic inquiry, both biblical studies and scientific disciplines. For traditional thinking about the Bible, the dominoes were unraveling down the slippery slope, so to speak. And judging by the persistent resistance offered by conservative scholars during the latter half of the nineteenth century (particularly at Princeton Theological Seminary), the threat was very real indeed.

It is not at all an exaggeration to say that, for many, “attacking” the Bible in this way was nothing less than an “attack” on the gospel itself. It is fair to say that Fundamentalism and by extension Evangelicalism were born out of this conflict between older views and new discoveries. In my opinion, even though some of the dust has settled, the nineteenth century is a blow from which Evangelicalism has yet to recover–a point demonstrated by the very existence of the BioLogos project.

The work before Evangelicals is essentially one of synthesis. How can we (1) speak of the Bible as God’s word while also (2) facing with integrity things like archaeological discoveries and advances in scientific knowledge of the world? This is an important, even vital, question to consider, for apologetic reasons as well as encouraging the faithful. How can we talk about God and the Bible now, in view of these circumstances?

I would like to suggest that a very helpful way of talking about the Bible that can account for the present challenges is what I call an incarnational model, where the nature of the Bible is understood on analogy with the person of Christ. As Christ is both completely divine and human, the Bible is a book that is both authored by God and by human beings. This has important implications for how we read the Bible, indeed, for what we expect from it.

In my next post I will define more clearly what an incarnational model is before we begin looking at specifics.


read next post
Sense, Reason and Intellect
archives most recent
More from Beliefnet and our partners
previous posts