One Hundred and Fifty Years…and Counting 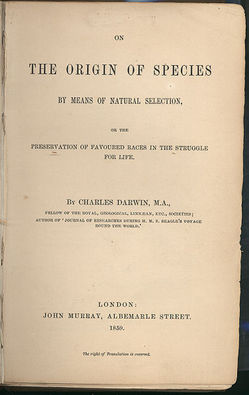 This past Tuesday marked the 150th anniversary of the publication of Origin of Species, undoubtedly one of the most influential books of all time. It seems there have been dozens of Darwin conferences this year commemorating not just the publication of the book, but also the 200th anniversary of Darwin’s birth on February 12, 1809. Most biologists, including myself, would likely consider Darwin to be the most thorough and insightful biologist in history. As a biologist, and as a Christian committed to seeking truth, I believe there is much to celebrate during this anniversary year.

On the day before the official anniversary, I was talking with a friend who had attended one of the Darwin conferences. The meeting had included some of America’s most well-known experts, who weighed in on the social ramifications of the 150 year old evolution/creation debate. My friend told me that the experts at this conference had been somewhat stumped when someone in the audience asked how it could be that when faced with the enormous amount of data in support of Darwin’s theory, good honest thinkers could remain young earth creationists–a line of thought so out of touch with scientific reality. I was somewhat incredulous that the experts would have been stumped by this question. Perhaps I’m the one who is naïve, but to me the answer is simple. As I see it, all it takes is a couple of one-on-one dinner conversations with a couple of articulate persons and I think you come to understand their dilemma.

I am going to discuss three people with extremely impressive academic scientific credentials who believe in a young earth. They all have something in common and, even though these three individuals know the science much better than most in our society, I think they epitomize why millions of evangelical and fundamentalist Christians refuse to blink in the face of the mass of scientific data. Since some of what I will write is based on informal conversations over a meal, I have decided not to name them. I hope you will see that I deeply respect each one of them.

I met Person A at a conference in Kansas City eleven years ago. He was the only young earth creationist in attendance and I admired his courage to stand up for what he believed to be right, even though he was the only one who thought that way. “A” obtained his Ph.D. in paleontology at the nation’s most prestigious university with one of its most prestigious scholars. He knows the science very well and he knows how compelling the scientific data is. However, at this Kansas City conference he told us that no matter how strong the scientific data seemed to be, he was confident that it would eventually prove to be false. “Right now, we who hold the young earth perspective are losing,” he said, but he was staking his life and career on the premise that eventually the tide would turn. His faith in the literalness of the Genesis account trumped all else. Why? He told us that all that brought him meaning was grounded in the literalness of Scripture. Change the interpretation of the first three chapters of Genesis, he believes, and the entire Bible disintegrates, and with that disintegration so also goes all aspects of his purpose in life. So from his perspective when the Bible and science disagree, it is science that will eventually be shown to be incomplete, not the Bible.

Person B, like “A,” has extremely impressive academic credentials. He is well-trained in the field of population genetics and served as a professor in plant genetics at a university which has a long tradition of being the world leader in this discipline. He is also the inventor of a very important biotechnology tool. I had a most enjoyable dinner conversation with “B” as part of a small one day meeting we attended in Pittsburg in July, 2008. “B” told me of his journey from agnosticism/atheism to theistic evolution, to “big tent” intelligent design, until he finally ended up as a young earth creationist. “In essence,” he told me, “I choose young earth creationism because it allows me to engage the Bible in a manner that results in my feeling closer to God.” Like “A,” he acknowledges there is overwhelming supportive data for an old earth and evolution. Like “A,” he believes it will be possible to identify holes in the evolution arguments and he is working optimistically at identifying them. I loved being with “B,” for reasons that had nothing to do with his science, but everything to do with his warm Christian spirit. Except for my feelings about the quality of his science, being with “B” was a wholly positive experience. “B” has ultimately decided that God speaks through scripture in ways that are literal and not figurative. If we try to force the Bible to conform to scientific interpretations, he feels, we gain credibility with the world, but we lose the faith element that holds us close to God. He chooses the latter, and is convinced that the data will eventually catch up to the Bible.

Person C is another young earth creationist with very strong credentials. He has a Ph.D, in the history of science from another of the world’s best universities. “C” was one of about 16 persons at a small one-day meeting I attended in Chicago in July 2007. I didn’t have the good fortune of sitting down for a meal with him like I did with “B, or going for a short one-on-one walk as I did with “A.” However, I did sit across a table from him for several hours and felt that I came to understand his heart, as well as his mind through the words that he spoke. At one point, the tears started to flow as “C” described that his one and only desire was to be thinking in a way and acting in the a manner consistent with what he sensed God wanted of him. Choked with emotion and unable to talk for awhile, he eventually told us he would step away from his position in a “second,” if he became convinced that is what God wanted of him. I have no doubt he would. With theological reasons as his motivation, he genuinely thinks that he can find flaws in the scientific data. Theology and his personal relationship with God trump the science. The science, as he sees it, will eventually come around.

Each of these individuals believe as they do, not because of scientific data–they all realize how strong it is–it is their view of the Bible and the concomitant theology which drives their thinking. Their purpose and meaning in life is deeply embedded in a particular view of Scripture. Their relationship with God is deeply embedded in that view. Their hopes and dreams for their children and grandchildren are steeped in the view provided by this tradition. If you rip that view away from them, you rip away their compass and they would have nowhere else to turn.

So I am a little surprised that leading secular scholars find it difficult to understand why these individuals and their many followers hold fast. Each of us need to get up in the morning with some sense of purpose, and even these three individuals with minds that are as sharp as the secular scholars themselves are convinced that they have had a life-changing encounter with Jesus Christ consistent with what is revealed to them through Scripture. They know of no way to hold on to that conviction while at the same time accepting the science that seems to contradict. Given that choice, they choose Scripture over science. They are more certain of their relationship with Christ, as grounded in Scripture, than they are of the findings of science.

So we at The BioLogos Foundation cannot focus purely on the “Science” in Science and the Sacred, nor can we focus purely on the “Bio” in BioLogos. Every bit as important to our discussion is the “Sacred” is the “Logos.” We have to show people in ways that really make sense that the tenets of evangelicalism don’t stand or fall on whether we accept 150 years of data from evolutionary biology and 180 years of data from geology. With that in mind, we are delighted to announce that beginning tomorrow, Harvard-educated evangelical biblical scholar Dr. Peter Enns is officially joining the BioLogos team and will be especially involved in working with us on our Science and the Sacred blog. Clearly there are two important components to our work. One is to communicate the solidity of the scientific data. Together with our many scientific colleagues, Karl and I will continue to work on that. The other, however, is every bit as important. We want to remain faithful to Scripture as the inspired Word of God and to the living Christ through whom all things are created and in whom all things are held together. We need a biblical scholar to help us communicate this message well. Welcome Pete. We believe your availability is not just happenstance, and we are delighted to work alongside of you.