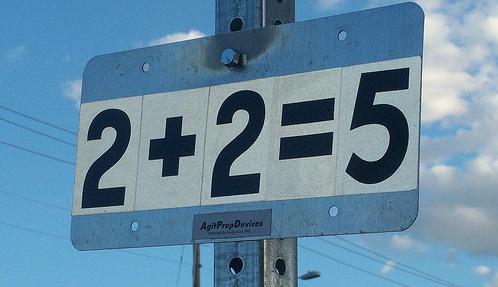 Many evangelical books on science and creation insist that there are major flaws in the idea that life appeared gradually over time. Rather than highlighting minor issues with the theory, they insist that evolution is a corrupt and inherently wrong theory that must be discarded.

However, the problem is that the idea of life evolving gradually over billions of years is not a peripheral theory in science. By insisting on a young earth and literalist interpretation of Genesis, one is calling into question the central tenets of astronomy, astrophysics, nuclear physics, geology, and biology. These theories hold the old age of the earth and the gradual evolution of species as an absolute truth, and they are supported by countless observations and experiments conducted over the past 150 years.

So central is evolution to these sciences, in fact, that in his book Coming to Peace With Science, Darrel Falk compares removing evolution to insisting that 2+2=5. While initially such an idea seems a minor change to mathematics as we understand it, in reality it destroys the very core of mathematical theory. So it is with evolution; its removal would collapse modern science as we know it.

This is not to say, of course, that the centrality of a scientific theory means Christians should never question it. However, as Falk advises:

It behooves the church to be certain that it is resting on a secure, well-reasoned foundation before it starts dismantling the process.

–Coming to Peace With Science, pg. 24