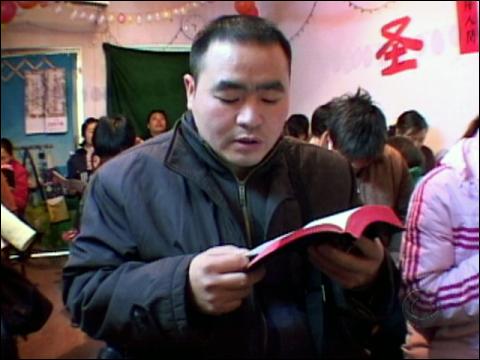 I saw recently a statistic saying that China today exports as much every six hours as it did in all of 1978, when Deng Xiaoping’s revolutionary opening of China to the world started. Thirty years ago, would anyone have foreseen China as prosperous as it is today? And would anyone have predicted that so many Chinese would be turning to Christianity? NPR is reporting all week on China’s Christianity boom. Why are so many Chinese accepting Christ? Excerpt:

In the past, she has left the village to work in Shanghai. She says her belief in Christ was a lifeline in the alien metropolis and her church acted as her family.
“Whether they know you or not, they treat you as a brother or sister,” she says. “If you have troubles, they help out with money or material assistance or spiritual aid.”
As China urbanizes and millions of rural migrants experience the social and economic dislocation of traveling to new cities, Christianity can provide them with an instant community.
Many believers sitting on the hard wooden benches of the village church are older. They tell stories of the rewards of faith and how prayer cured illnesses and ended beatings from husbands.

No one knows for sure how many Christians there are in China, which is still officially an atheist state. But most believe the real numbers far exceed the official estimate. Look at this:

Some recent surveys have calculated there could be as many as 100 million Chinese Protestants. That would mean that China has more Christians than Communist Party members, which now number 75 million.

Can you imagine? This might not technically qualify as a miracle, but it’s miraculous all the same. And Chinese evangelists are growing in strength and boldness:

[Government leaders’] powers to govern religion do, however, seem to be waning. That seems clear in a rural village in eastern China, where young people are openly trying to gain converts in defiance of the laws prohibiting proselytizing in public places. … China’s youth once trundled across the countryside spreading communism. Now, they’re spreading God’s word.

Amazing. The Spirit blows where He wills. By the way, Dr. Fenggang Yang at Purdue leads a scholarly effort to track and to understand what’s happening in China’s religious life (not only Christianity in China), via his Center on Religion and Chinese Society. By the way.2, one of my favorite books is “Christ the Eternal Tao,” a study by an Eastern Orthodox priest-monk of how Taoist themes and concepts in the life and teachings of Jesus.