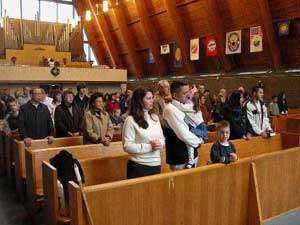 Let’s suppose that a gay submariner based in New London falls in love with, oh, a local cop, and the two decide to get married. They go down to the city Marriage License Office on State Street and for $35 obtain a State of Connecticut marriage license. Meanwhile, they have asked one of the Protestant Navy chaplains to perform the ceremony.

“Sure, guys,” says the chaplain, who happens to belong to the United Church of Christ, which six years ago became the first mainline denomination to officially support same-sex marriage.

“And can we do it at Shepherd of the Sea (SOS) chapel, where all base family services take place?”

Why not, indeed? And as the Navy worked through its policies and procedures for the post-Don’t-Ask-Don’t-Tell era, it concluded that base chapels could in fact be used for same-sex marriage ceremonies, although no chaplain would be obliged to perform them. So it issued a “guidance” to that effect. Once word got out, same-sex marriage opponents and their Republican minions went predictably nuts, and late last night, the Navy announced that it was revoking the guidance at least temporarily pending further review.

The opponents’ claim is that permitting same-sex marriage ceremonies under federal auspices violates DOMA, the 1996 Defense of Marriage Act–“clearly violates,” is how  Rep. Todd Akin, R-Mo., chairman of the House Armed Services Seapower subcommittee, put it. Does it?

DOMA does two things. It protects states that do not permit same-sex marriage from having to recognize marriages contracted in jurisdictions that do. And:

This language is commonly understood to be a federal definition of marriage (one man, one woman), but that’s not what it is. It’s a rule for deciding what federal legislative, regulatory and interpretive language means. The point being: When such language refers to “marriage” or “spouse,” for example by specifying federal benefits, it cannot be construed to apply to same-sex marital arrangements authorized by a state (like Connecticut). Thus, our submariner would not be entitled to married housing on the New London base simply on the strength of existing rules regulating access to housing.

But when the federal language itself refers to “same-sex marriage” such as can be contracted in a state that permits it, as the Navy guidance does, then it’s not a question of “determining the meaning” of the language–i.e. making “marriage” and “spouse” now apply to same-sex couples. The language refers precisely to “same-sex marriage.” It means what it says. Last year’s repeal of DADT may well involve conflicts with DOMA. But not in this case.