With approximately 1.6 billion followers (about 23% of the global human population), Islam currently ranks as the second largest religion in the world. But Islam, like the rest of the world’s major religions, is not one thing, but many. Islam is not homogeneous and monolithic, but variegated and diverse.

For one thing, Islam, like other major religions, itself formally subdivides into a number of divergent wings, branches, and sects. For more details on this aspect of Islamic diversity, see my previous post (Part Two of this series).

“Radical Islam” is an extremist minority that by no means represents, or speaks for, the majority of the world’s 1.6 billion Muslims.

But then, all sorts of misconceptions about Islam seem to abound among much of the non-Muslim public. For instance, many people seem to equate the Islamic world with the Arab world, as if the two amounted to essentially the same thing. Such people might be quite surprised to discover that only about 20% of the total global Muslim population is Arab. That is, only 20% of the world’s Muslims live in the Middle East (and North Africa). 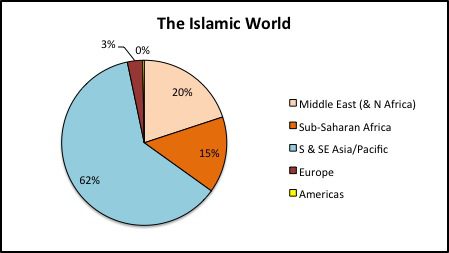 In other words, the vast majority of Muslims (about 80%) are not even part of the Arab world at all. Yet this popular notion of Islam as an essentially if not almost exclusively Arab (or Middle Eastern) faith persists. The fact is that Islam is truly a global religion — a “world religion” in every sense of the term.

There are currently 49 Muslim-majority nations on Earth. Less than half (only 22 of them) are part of what is generally regarded as the Arab world. And the nations with the world’s largest individual Muslim populations are not even found in the Middle East or North Africa at all.

The single most populous Muslim nation is, in fact, Indonesia. The next largest Muslim countries, in descending order, are Pakistan, India (despite the fact that India’s vast population is 80% Hindu), and Bangladesh. All together, some 62% of the world’s Muslims live in South and Southeast Asia.

Understanding something of the actual nature, and range, of Islamic diversity may hopefully serve as a caution against stereotyping an entire religion of 1.6 billion adherents based upon the radical activities of a militant and extremist minority.