Having already addressed, in previous blog entries, the basic breakdown into wings, branches, sects, movements, denominations and similar sorts of internal subdivisions that is found within Judaism, Christianity, and Islam, I’d now like to round out the big picture in this manner by looking next at the remaining two religions generally also included among the “big five” of the world’s major faith traditions: Hinduism (beginning with this blog entry) and Buddhism (in a subsequent blog entry).

With just under a billion adherents worldwide, Hinduism is the third largest religion in the world, after Christianity (the largest) and Islam (the second largest). Estimates vary somewhat, but Hindus appear to account for roughly 14% to 15% of the world’s population. 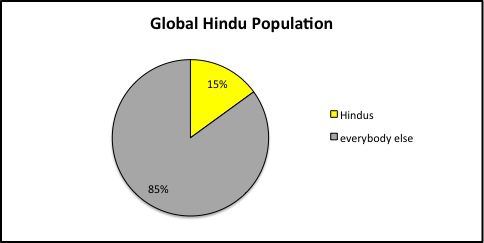 Hinduism is, of course, most strongly associated with its native homeland: India. And approximately 84% of India’s vast population is indeed Hindu. However, Hinduism is also the majority religion of Nepal (where 91% of the populace is Hindu) and Mauritius (54% Hindu). Additionally, about 93% of the population of Bali (a province of Indonesia, which is otherwise majority Muslim) practices a unique local variant of Hinduism.

The Hindu faith has also spread more thinly elsewhere, going wherever Hindus have migrated around the globe. Small immigrant Hindu communities can be found worldwide. Within the United States, Hindus remain a very small religious minority, accounting for only about 0.4% of American adults. Nevertheless, Hindu temples can be found in most major U.S. cities. 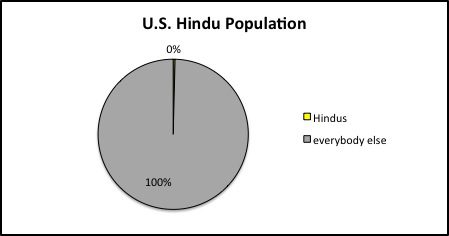 Like every major religion, Hinduism is not one thing, but many. The Hindu religious tradition is likewise internally diverse, and highly variegated.

And its biggest sectarian divisions relate to precisely how different Hindus differently picture, imagine, visualize, conceptualize, mythologize, or otherwise conceive of God. Within Hinduism, the Supreme Lord can be depicted, visualized, talked about, or comprehended in a plurality of alternative — and quite distinctive — ways. Among the most popular Hindu forms, manifestations, personalities, “public images” or “versions” of God are Vishnu, Shiva, and Shakti (as Devi, the Mother Goddess).

God is also conceived of by some Hindus as essentially nonpersonal or transpersonal in nature — as the One, the Absolute, All That Is, the World Soul, the Supreme Reality or Ground of Being referred to as Brahman.

Further complicating this picture is the fact that each of the various alternate Hindu ways of depicting, comprehending, and personifying God is additionally surrounded with an extended family of divine spouses, consorts, offspring, and assorted other related gods and demigods.

Thus Vishnu is accompanied by his wife, the goddess Lakshmi; Vishnu is also said to have descended to earth numerous times in the form of various human (and non-human) avatars or incarnations, including such epic heroes of Hindu lore as Rama (whose wife is Sita, and who is further associated with the monkey god Hanuman) and Krishna (whose lover is Radha). Shiva, for his part, is associated with such female divine consorts as the goddesses Uma and Parvati, and has for a son the popular elephant-headed god Ganesha.

Now, how does all of this divine diversity work itself out, in Hindu worship? And in the face of all of this seeming polytheism (with Hindus worshipping so many different deities), how is it possible that many if not most Hindus often insist that they are actually not polytheists, but monotheists?