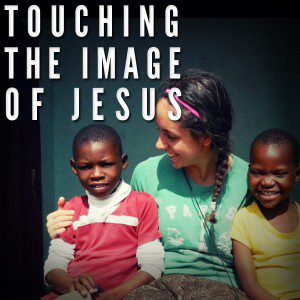 When we left Alexandra, she was wondering how she was going to raise $3,411 to travel across the world with a group of Christians she didn’t know.

She wasn’t a Christian and had no church.

But she did feel deeply compelled to get on this trip to the Ludlati CarePoint. So she decided to enter a contest to win a free trip with Children’s HopeChest that was going on at the exact same time.

We sold nearly 1,000 t-shirts–with each person getting an entry to win the contest.

Here’s what happened when Alexandra entered…

One morning an update in my newsfeed boldly proclaimed, “Buy a t-shirt and get a chance to win a free mission trip with Children’s HopeChest.”

I read the details and found out that if you posted the link in your blog and people bought shirts from your link, you would receive an extra entry into the contest. I wrote a quick blog post expressing my feelings about why I wanted to go on the trip, posted the link, ordered a shirt, and went on with my day expecting nothing to come of it.

Soon after I posted the link, my sister called to tell me she was buying a shirt off my blog. I was thankful, but a little nagging voice in my head kept whispering to me,

“The odds are against you. God can’t do this for you and even if He could, there’s probably no reason why He would.”

I had all but forgotten about entering the contest until the next day when I saw a link to an article by Tom Davis on the HopeChest Facebook page that mentioned my name.

I had to do a double take.

This had to be a different Alexandra they were talking about. Why would Tom Davis have anything to say about me?

In disbelief, I clicked the link to the article and read. And somehow, most incredibly, it really was me that he was talking about.

As I read, I felt both a sense of gratitude, and a sense of immense guilt. Mr. Davis had recognized the depth of my passion to serve others. I was thankful that someone finally understood.

But I was terrified by something else he said in his article.

“There is nothing simple about extreme poverty. And there are no quick answers to problems like human trafficking. These persistently complex problems will not be solved by a t-shirt or a mission trip contest. But they will be solved by passionate people like Alexandra who double-down on Jesus’ teachings in the Gospel.”

When I read these words, I felt like someone had punched me straight in the chest.

And as people messaged me on Facebook and commented on my blog to encourage me after reading his article, I felt even worse. I knew their hearts were full of kindness, but I felt so undeserving.

As the contest lingered in my mind, all I could do was pray.

I didn’t ever pray to win the mission trip. That didn’t sit well in my heart. I didn’t want to win a prize, I wanted to serve, so I prayed every day that if I was truly called to go to Swaziland, I’d be able to find the financial resources to do so. And, I prayed that whomever God chose to win this mission trip, would be blessed, and able to bless others as a result.

I prayed this prayer up until one chilly March day when I was on the way home from college for spring break and I got a text from a friend that simply said, “ Oh my gosh! You won!”

I didn’t even know what to make of it. My dad was sitting by me, driving the car, but even as my stomach stirred with excitement and confusion, I kept my mouth silent, still believing that God couldn’t make this happen for me.

“What are you talking about?” I texted back to my friend.

My friend replied that my sister had won the contest but was giving the trip to me.

And still, as the excitement stirred inside of me, I didn’t want to believe it was true. I had talked to my sister earlier in the day and she hadn’t mentioned anything about this.

Still, maybe I would have to call my sister again just to check. So I did. And my sister told me she had been instructed to keep it a secret all day until it could be posted on Facebook as a surprise for me.

And then, it sunk in, and I just screamed while my dad grasped the steering wheel in terror thinking that something was terribly wrong.

But quickly, I began to laugh hysterically and cry at the same time and he realized what had happened and shouted, “No way! That’s incredible!”

And indeed, it was. It was absolutely incredible.

My sister, my dad, and I laughed for a long, long, time, unable to really articulate words. But as the three of us laughed, I felt laughter coming from somewhere else too, and I remembered how I had told God that He couldn’t do this for me with such assurance.

The laughter grew louder and clearer as I felt the words, “Oh yes I can!” flood my heart.

Touching the Image of Jesus: Part 1
archives most recent
More from Beliefnet and our partners
previous posts