Touching the Image of Jesus: Part 1

Sometimes there’s a lot more going on than we can see with our physical eyes. At least, that appears true in the case of Alexandra Warwick.

I first introduced you to Alexandra in this post, Rejecting Slacktivism. I was intrigued by the massive response to the Kony 2012 video campaign. As the likes and shares reached into the millions, I couldn’t help but wonder what would happen if even a small fraction of those young people did something more than just click, “Like.”

And that’s when I read this blog from Alexandra. In it, she describes the kind of passion and commitment that I felt was missing from all of the Kony craziness.

What happened after that, well… I wanted Alexandra to share that in her own words. So she’s going to take over the next few posts to explain to you how a t-shirt turned into something much larger. Something that you had to live through to believe.

My friend Carrie stares down at me from her bed with a small smile on her face. We’re at the guesthouse on our first night in Swaziland and she’s bundled up in her soft white comforter, protected from the cool evening air. The sound of her voice floats through my head but I don’t really listen to what she’s saying because I’m curled up in the corner of the room writing.

“What?” I say absentmindedly as I pull my head up from my journal.

“Are you ready to go to the CarePoint tomorrow?” she repeats a little louder. I close my journal, put my pen down, and think.

Months before, I saw one of my Facebook friends post about a trip to Ludlati CarePoint in Swaziland. I don’t remember where I was, what day of the week it was, or what time it was, but I do remember being overcome by the gripping idea that I needed to go on this trip. However, almost as soon as the desire popped into my head, doubts and worry popped in also.

I knew it was a Christian mission trip, and I wasn’t Christian.

Would the team even want me to go with them? And besides, this was a third world country we were talking about. I could think of much safer ways to serve my brothers and sisters. I couldn’t shake the desire, though. Something kept telling me, “Go! Go! Go!”  So, I took a leap and contacted the team leader.

When I told my friends and family about my desire, I got asked so many times, “Do you think you are ready to go on a trip like that?”

Every time this happened I would think about how crazy I was for wanting to fly across the planet with a group of Christians I didn’t know to spend time in a third world country serving children at a CarePoint I knew almost nothing about.

And I’d tell people the truth and say, “No, I’m not ready. But I’m going to try to do it anyway.”

I knew a total of about three people who wholeheartedly supported every aspect of this trip and wanted to do whatever they could to make it happen, but I doubted even their best efforts would get me the $3,411 I needed. I knew that I was supposed to go; at least I thought I knew, but I had no idea how I could possibly make it happen.

And then came the t-shirt contest. 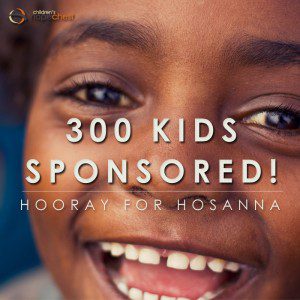 What do kids think about helping kids?
archives most recent
More from Beliefnet and our partners
previous posts