What happened after Artyom was returned to Russia? 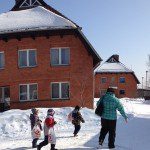 Two years ago, Artyom Savelyev was “returned” to Russia by his adoptive mother. Placed on a plane with a note and a one-way ticket, Artyom was sent back to Russia.

Shock, anger, and outrage do not adequately describe the reactions of many people to this story. As one reporter put it:

One of the most inexplicable parts of this inexplicable story is that little Artyom was placed on a 10-hour flight by himself. He had ten hours to think about his rejection, to wonder what would happen when his flight landed. He was placed in the care of strangers who hopefully were kind to him. I didn’t let my own daughter fly unaccompanied until she was 13 and then only on a two hour flight. Who sends a little boy alone across the ocean?

Many wondered what has happened to Artyom. Where is he now and how is he doing?

Artyom, now 9, lives in village of group homes designed for orphans to live together in model families, and he seems to be thriving in this family-based environment.  From the story:

The aim is to raise orphans and abandoned children in family settings, in individual houses with mothers, or mothers and fathers, and siblings.Vera Yegorova answered a classified ad for “mother” in 1995. She has taken care of 17 children over the years, including Artyom…

“We send the kids to regular schools, to the local day care center,” says director Anatoly Vasilyev. “We do this so that the children get more socialized, so that they’re not locked up in one organization.”

The family setting that Artyom now lives in is very similar to the Children’s HopeChest Family Centers currently operating in Russia. For over 10 years, HopeChest has placed Russian orphans in Family Centers designed to teach them independence, confidence, and life skills.

In some cases, those Family Centers have helped children avoid a “statistical outcome” of poverty, forced prostitution, crime, or suicide.  In the words of one Family Center participant (names have been changed):

“My name is Katya. I grew up in the orphanage with a girl called Nadya—we were like sisters. When we left the orphanage for tech school, the director said we had been invited to a HopeChest Family Center. I accepted the invitation to the Family Center; Nadya did not. I didn’t see her again until her funeral. The police told the orphanage director that Nadya had become a prostitute at a truck stop and was killed by one of the men who paid her for sex. He murdered her and left her in a ditch by the road.”

These types of interventions are critical for children facing life in an institution and separated from their parents. Of the many millions of orphans living in the world today, only the tiniest fraction will experience adoption (international or domestic in their own country).

One way HopeChest and others have responded to the orphan crisis is through Family Centers like the ones described above. Providing children with the best chances of overcoming their abandonment and abuse, and partnering with local leaders, caregivers, and experts who are committed to seeing each child succeed to their fullest potential.

The vast majority of children classified as orphans need an intervention like a Family Center because without it, they face a “statistical” future…one filled with bleak outcomes and steep challenges.

If you are interested in finding out how you can support a group of children in Russia who are living in a Family Center, please leave a comment.

One-third of U.S. trafficking victims saved by actions of "regular citizens."
archives most recent
More from Beliefnet and our partners
previous posts