In case you missed this episode or you would like to watch it again, ABC has the full episode online available for your viewing.

Eight teams remain in this sixth week of Expedition Impossible, with the Fab 3 winning last week after The Gypsies dominated the competition by winning the first four legs of the race. The other teams are the Football Players, the Cops, No Limits, the Fishermen, the Country Boys and the California Girls.

A new day dawns at the desert campfire as the teams awaken and prepare for the challenges ahead. The Fab 3 team is in good cheers while the Gypsies are worried about how well John’s ankle will hold up. “It’s not a good feeling at all.” As the teams gear up, the host Dave Salmoni calls them to gather at the start line. It’s a single day stage and the last team to cross the finish line this day will be going home.

Teams will use a hand line to cross a river, then travel half a mile on foot to a village and search for a local rug stall as the first checkpoint. The Fab 3 are the first to depart. The hand line isn’t difficult, but teams are going to get drenched in the river crossing. The Gypsies, Football Players and Cops are in the next departing group. The Fishermen, No Limits, Country Boys and California Girls round out the last group.

As expected, the Fab 3 reach the rug stall first. There, teams must search for rugs containing five large holes. The holed carpet is placed over a sign, with the holes showing the letters/words of the location of their next checkpoint. This is a search task that will end up randomizing the order of the teams after they arrive in groups to the stall. After a bit of trial and error, the Football Players are the first team to find a rug and overlay the sign with the rug in such a way to solve the location clue, “GO TO THE WATER FALL”, to which teams must trek two miles where the next checkpoint is located. A couple of teams solve the rug clue together in a spirit of teamwork.

The Football Players are the first to reach the waterfalls, with No Limits not far behind on a long, 15-minute set of steps going down. Jeff is helping blind Eric by calling the steps, “two short steps, five long steps…” It’s amazing how integrated these guys are as a team. Other teams are close behind. Meanwhile, the Fab 3 and the Fishermen are about to panic trying in frustration to find two of the remaining holed rugs as the other teams move on. The Fishermen beat them to the punch as the Fab 3 suddenly have gone from first to last at a single checkpoint. At this rate, they’ll need to find a flying carpet to catch up! Still, the Fisherman are clueless about what to do with the rug, so all is not yet lost for the Fab 3 in their race for next to last place. The Fab 3 find the rug, quickly solve the clue and leave the Fisherman in the village who eventually fall five minutes behind in last.

At the waterfall, teams have a choice to either jump down a forty-foot cliff directly into the waterfall pool or to rappel down the cliff face adjacent to the waterfall. Obviously, one route is quicker, but not for the faint of heart! After reaching the bottom of the waterfall, teams will have to follow the river downstream to the next checkpoint. The Football Players are the first team to literally jump in and move on. Eric of the No Limits team is concerned about rocks down at the bottom, but his teammates reassure that it’s no problem. Jeff offers to walk down and do it together with Eric, and they work their way to the edge and “hold my hand… one, two, three”, off the edge they go! The Cops, California Girls and Country Boys follow, also by jumping off. The Fishermen, in last, almost chicken out and decide to “go the slow way” and then change their minds and take the plunge.

At the next checkpoint, teams zip line across the river where they will get their next set of instructions. The zip line looks a little scary with rocks at the end, but they slow down on the line before reaching the rocks and have an easy step up over the edge of the river. On the other side, teams will find a locked set of paddles. In order to unlock the paddles, they have to first memorize the tag symbol on their paddles. Then one member goes to a nearby cave and searches for the matching symbol and the key with it which will unlock the paddles. The Gypsies are the first to arrive to the cave with the Football Players right behind and other teams arriving by the minute.

Next, the teams paddle down a rain-swollen river with dangerous rapids on single-person inflatable kayaks. Using a GPS, they try to locate the next set of instructions four and a half miles downriver. Back at the cave, the Cops guy takes a similar looking key, but the wrong one. Oops! As he put it, “You don’t pay attention, you don’t follow the clues, you end up going home.” And they fall back into next to last place, leaving the Fishermen in last once again.

Now comes the river rafting, pretty scary stuff through those rapids! Boom, the Football players already have troubles with Akbar flipping over in a chute as the Gypsies pass them for the lead. Four teams — No Limits, California Girls, Country Boys and Fab 3 — all follow together closely behind to round out the six teams now on the river. As some of the teams have troubles flipping in the water, the Fab 3 find an easier way around, and wow, they’re back up to second place after being in last earlier in the day! Eric is nervous about rocks again and his fears are well-founded as he flips next to a large boulder and almost gets sucked under and then pinballs his way down the rapids outside of his kayak with his teammates trying to guide him down. He eventually gets back into his kayak and joins his teammates down the river.

The Fishermen have kayak troubles and fall further behind the rest of the pack. The California Girls lose their focus and get stuck in some overhanging trees on the banks, and the Country Boys and Cops pass them by. The Gypsies are the first to arrive at the next checkpoint, a cave near the river, with the Fab 3 close behind. The instructions have the teams paddle another mile and then climb 300 feet to the finish line.

Keeping up their pace, the Gypsies are the winners of the sixth stage! The Fab 3 come in second not too far behind. No Limits comes in third and Eric is glad there aren’t any more challenges today. The Football Players roll in fourth and the Country Boys fifth. The Cops, California Girls and Fisherman are the last three teams left on the course, all within view of each other, and it turns into a race! The California Girls create a traffic jam at the landing, allowing the last-place Fishermen to catch up, but too late. The Cops and California Girls finish together, walking up to the finish line in near exhaustion, knowing the Fisherman are still too far behind to catch up by running. Thus ends the Fishermen’s Expedition, as their competitors applaud them while they board a waiting helicopter.

Next week: Paragliding out of a plane, the Gypsies have an unplanned tea break, the Fab 3 lose their patience and a serious ankle injury could end someone’s Expedition. Stay tuned! 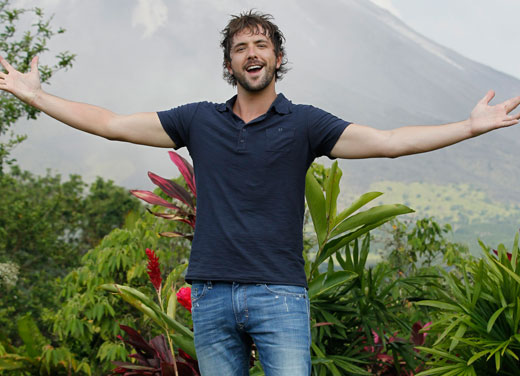