Tonight, either Adam or Dominic will be evicted and the next Head of Household will be crowned. Julie Chen tells us “no one is safe” as we get a recap of the incessant scheming going on in the house during the past week. We’re reminded that the Golden Key players are back in the game, which may or may not have an impact on the final vote. The arguments start between Daniele and Brandon with Rachel listening on. Daniele is fed up with Brandon acting like “he is King of the house” and their reneging on the past safety deal with Dominic, who they want out. Daniele then goes and talks with Porsche and Kalia to curry favor with the newbies. It’s already clear, though, that all it takes is the four vet votes plus one to see Dominic out the door, so there’s little the newbies can do on their own.

Jeff then gets into an argument with Dominic about “where he’s coming from” and Dominic’s stock is falling fast. Then Porsche goes and sees Jeff as Brandon and Jordan join them. Dominic’s back door strategy against the vets is exposed and he tries to defend himself by saying the back door idea didn’t come from him, but the vet guys don’t buy it and eventually refuse to listen to him. Rachel likes Dominic, saying Adam is “a total floater”, but it’s becoming clear even to her that a floater is less of a threat than an active back-door schemer.

Kalia finally gets involved and talks with Brandon, but he talks her down calling her a floater. Kalia counters that “you don’t know me. At all.” Which is probably true, as Kalia hasn’t made herself known since the beginning and Jeff really isn’t interested in knowing her. Kalia is getting spunky for once! The others are looking at her like, whoah, she woke up! “I won’t roll over for anybody”, she says. Ooo-wee.

Then comes a house meeting with all present and fireworks flying. Kalia is more vocal than she’s ever been. The others are listening and then all the marbles go rolling on the floor as schemes are exposed for all to hear. It’s becoming a shoutfest in a battle of egos, superegos and ids trying to justify logic with emotion.

“Hi, everybody”, says Julie as she gathers them, “there was a little drama in the house today.” Kalia replies that they all know that it’s a game and Brandon says there’s nothing personal. Jeff says he plays the game different (that is, he plays hardball) and “it’s showtime”. Daniele also says it’s a game and everybody plays it a different way, and that’s that.

The first to defend himself during the eviction meeting is Adam, who gives the usual wishy-washy speech saying it’s a game (do we need to be reminded of this for the n-th time?). Dominic comes out with a few sharp words, saying there’s no way to win a game if it’s played a certain way (hint to the vets about keeping their word). The votes don’t take long, with one commerical break, and Dominic is ousted in a 7-1 landslide. He’s too toxic and radioactive for the newbies to keep around, while Adam managed to stay out of the fray.

Dominic leaves with a short hugfest and walks into loud applause from the audience outside. Meanwhile, the house goes into Reset mode. Julie interviews Dominic, who has a few sharp words about the housemates in causing his defeat, saying the newbies never really had a fighting chance against the vets. Julie asks if his feelings for Daniele were real, but Dominic focuses more on the game aspect, “I always had her back, she had my back” but he doesn’t allude to any more than that. Julie asks why he would trust anyone in the house and whether he didn’t overplay the game, which he admits he did.

Julie tells us “this game is about to change.” “Congratulations on making the top 10. Golden Key holders are back in the game and now everybody is back on their own.” But don’t expect Jeff & Jordan and Rachel & Brandon to split up as partners!

Outside, the back yard is turned into a ski resort and the HoH competition begins. Everyone stays up on a couple of ski-pole handholds while their skis sway back and forth underneath them against a wall. It’s an endurance contest that will last past the end of the show. The first five to drop will have to open a snowball, where there’s good and there’s bad, with one holding $10,000.

Stay tuned Sunday to see who wins the HoH and who the winner nominates. Julie tells us that we as the audience will play a role in deciding the next game change twist.

Then the snow machines turn on, and they’re wearing shorts and tank tops! Brrr! Who will survive the freeze of the snow and the envious, frozen stares of their housemates as they hold on to win the HoH competition?

As the mountain sages once said, even the hottest desires will chill in the purity of the falling snow. 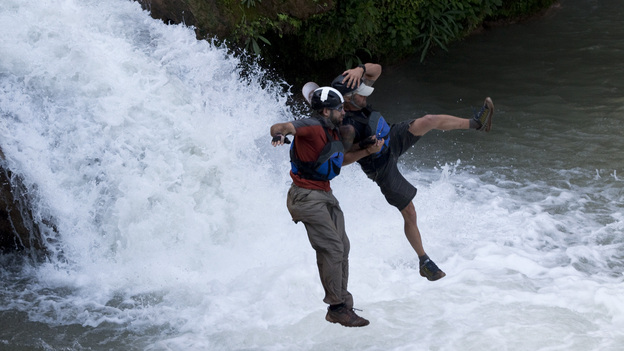