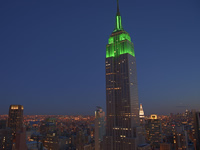 As the fading crescent moon can attest to, the month of Ramadan is coming to a close. All around the world, readings of the Qur’an that started on the first page 30 days ago are reaching their conclusions. The long nights in the mosque over the last 10 days, in eager search of the Night of Power, have left many exhausted yet spiritually alive. For me, this month has been a time to look carefully at my life as a Muslim in America.

Is my life being lived in accordance to the principles of my religion? Is there anything I have done in the past for which I need to seek forgiveness? Are the big decisions I am making in my life ones that will keep me on the the straight path, and keep me from wronging others? These questions have kept me up at night for the last month, as I ask God for guidance in the coming year.
But in addition to recommitting oneself to the principles of my religion, Ramadan has also been a time for reinforcing social bonds, both within the Muslim American community and between Muslims and other Americans. As Muslim American institutions — mosques, schools, community centers, and media — continue to grow, the resources available to Muslims celebrating Ramadan increase. And as awareness of Ramadan increases among the American population at large, opportunities for interfaith understanding and shared celebration present themselves. One need only look up at the Empire State Building — clad in green over the coming weekend in commemoration of the end of Ramadan — to see how far we’ve come, despite the challenges of living in a post-9/11 America.

Growing up in southern California, I could barely imagine green lights on my home, much less an iconic New York landmark. But the New York reference is fitting, for the countdown has begun for the end of Ramadan and the start of the Eid celebrations, where fasting will give way to feasting. Muslims should take time this Eid to remember that a significant portion of Americans are willing to overcome their suspicions of Muslims if we contribute to society as citizens and neighbors and communicate our peaceful ideals effectively and influentially to Muslims and non-Muslims alike. This Ramadan, in particular, has given me hope that the gaps between all of us can be narrowed.
As in the beginning of the month, Muslims will be scanning the skies (or logging on to moonsighting.com) for news of when the exact day will be (calculations say Saturday, but people will start looking for the new moon tonight). But this time, the anticipation will be mixed with a little sadness. For as physically challenging as the month has been, it has bound me closer to my faith and community. It has served as a reminder of just how bountiful God’s mercy is, and that it is as close as a heartfelt prayer and a commitment to do right by ourselves and those around us.
The treasured house guest of the last 30 days is about to depart, and now Muslims around the world are preparing a great feast for the departure of our visitor. And it is time for me to break out my finest Eid clothes and get the gifts ready for the children.