Today’s post is by my wife, Heather, as a recap of the week. Enjoy.

Today marks the end of my first week of being married to a monk. Married to a monk…that doesn’t even make sense. Monks don’t get married, and now we know why. To be more specific, I am married to a Jain monk (the most intense form of monk).

At the beginning of each month, I’m filled with excitement. I love getting the opportunity to learn about the culture and beliefs of other faiths. But even more, I like these faiths being on display for me in the comfort of my own home. Call me lazy, but I like being able to learn about other religions by simply watching my husband and not actually doing the research on my own. He is my theology Google. I simply sit back and watch and as questions arise, I ask. I have learned so much this year…and as one month closes, I find myself eager for the experiences the next month will bring.

November has been the exception. Living with a monk is extreme. Have any of you ever tried it? Probably not, and there is a reason monks live with monks and not with laity. Just a side note, unless you seriously want to have your sanity tested…don’t support your spouse’s decision to become a monk. They are not supposed to use any form of electrical appliance- which means no cooking. This presents a problem when your spouse does 95% of the cooking in the household. As if that’s not enough, they aren’t supposed to do any form of work. Nope, only meditation and teaching all day long. WHAT?! Ok- I’m sorry, but this seems like pure laziness to me, but I suppose if you don’t have a home/family to support, you really don’t need to work. Luckily though since I do work, and Andrew stays home with our children, he has still been keeping up with the household chores (minus the cooking). While we’re on the topic of food, let’s talk about the Jain monk dietary habits (or lack there of ).

Andrew has been eating one meal a day. But it’s really not a meal. He can only eat what I give him(so he really needs to stay on my good side 😉 , and only what fits in the palm of his hand. So, around noon each day, I give him a bagel with peanut butter and a few vegetables. On days when I work, his 70-something year old grandmother brings him lunch. This seems absurd to me. A fully capable young man who can’t fix himself something to eat? Anyway, I digress. So, I’ve covered work and eating, what else? How about sleeping? Well, he’s not really doing much of that this month either. My estimate would be he has had maybe 8 hours of sleep in these first 6 days. He is trying hard to stick the premise of not sleeping in bed, and is sleeping on the hardwood floor in our living room. But he can’t use any blankets or pillows so comfort is a thing of the past, and being uncomfortable is not really conducive for sleep.

I was attributing Andrew’s lack of emotion and disconnect to lack of food and lack of sleep, but I’ve learned that too is part of the monk lifestyle. They are not to be affected by situations and circumstances, therefore they can’t have much emotional response. He talks less, smiles less and has laughed only once or twice in 6 days. This is hard for me to process, but even harder for our children, who keep asking “what’s wrong with Daddy?” And then there’s the issue of bathing…We all know that this was the straw that broke the camel’s back. Jain monks believe in extreme non-injury to the point of not even bathing, because it can harm tiny microbes and organisms in the water and on your skin. Thankfully, after 3 days of not bathing, and a house full of odor, Andrew is now bathing (without soap), but the smell is gone!

Now, I feel like I need to clear the air a little bit. Yes, we know that I’ve had my first real emotional meltdown this year. In Andrew’s post where he said I turned into a person that he didn’t know, he’s right because I also turned into a person that I didn’t know. 10 months and 3 days of stress, worry, ups and downs all came to a crashing halt. I was appalled at the fact that Andrew was really going to neglect his personal hygiene and risk the health of his family for 30 days just for this project. Enough was enough, and so I broke down. I cried, screamed, and said many things that I am not proud of, and then found out that it was all a set up. At first, I was mad that he had played with my emotions like that, but then he explained and I understood, and I could deal with that better than the idea of him not bathing for a month and basically telling me that I was going to have to “deal with it”. This experiment that he used me as a guinea pig for caused a lot of tension for a lot of you, and I appreciate many of you coming to my defense, but guys there are no sides here. I feel like I was put in an uncomfortable situation to teach all of us a greater lesson. That’s something that is done in many faiths. From my Christian standpoint, God often uses our most uncomfortable circumstances to  teach us something. I feel this is no different. I was an instrument, and though I didn’t like it, we’ve all learned a very valuable lesson.

So because of all these extreme aesthetic practices, I feel like it’s been distracting and I haven’t really been able to learn much about the Jain faith this month. I’m hoping now that the shock value has worn off, I will be able to move forward and learn and be excited for this month just as I have the previous ten. 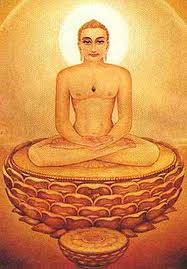 Who Was Mahavira and What is a Tirthankara?
archives most recent
More from Beliefnet and our partners
previous posts