“To kill any living being amounts to killing one’s self.
Compassion to others is compassion to one’s own self.
Therefore one should avoid violence like poison and thorn.”
–Mahavira

It’s no secret that Jain philosophy is big on ahimsa (non-injury), however does that hold true outside of their relationship with their fellow man?

According to the Jain world view, Jiva, or the eternal essence of a living thing, is everywhere. From single-cell microbes to blue whales, all forms of live are sacred and precious because every jiva has the potential for moksha (liberation). For this reason, most Jains are strict vegetarians and even the treatment of the plants they consume is important. One of the Gunavrats (subsidiary vows), which is part of the 12 vows lay Jains take, is called Bhoga-Upbhoga vrata which is a commitment to only use resources according to one’s needs. This sort of thinking flies in the face of world infected by unchecked consumerism and greed.

With ahimsa in mind, all forms of life are viewed as equals and Jains afford every creature and even plants the same rights of life and liberty most of us limit to humanity. In this way, Jains have a long tradition of maintaining animal shelters called panjrapoles in India. 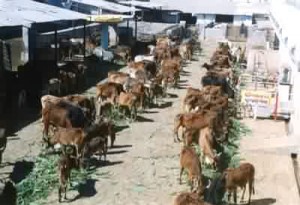 A diverse range of species are taken in at these shelters. In most cases, the animals are sick or injured and therefore cannot care for themselves. These animals are cared for by the entire Jain community, including monastics and the laity. A veterinarian typically stops by once a week for check-ups. Once the animals regain their health, they are returned to their environment.

Because Jains do not believe in harming animals, their position on ahimsa presents a difficult challenge for these institutions. Many animals who visit the panjrapoles are terminally ill or injured. Jain philosophy on ahimsa forbids followers from any act of euthanasia, therefore animals are treated and cared for, but left to die naturally.

For some, this creates a tough position. Which is better, alleviating suffering with euthanasia, or avoiding all violence against the animal?

This is the current debate going on within the Jain community regarding these shelters and the greater principles of ahimsa. At what point does ahimsa go too far? If compassion for life is the most important aspect of one’s faith, is not the alleviation of suffering also part of the package?

The Jain tradition of care for those who cannot care for themselves is a noble one. Indeed, the practice of non-injury might be easy when applied to our fellow man, but it takes humility and courage to extend that notion to our non-human brethren.

Where do you stand on the euthanasia issue? Is non-injury set in stone? At what point does allowing suffering–even in the context of a creature’s natural demise, become negative?

read next post
Married...to a monk?
archives most recent
More from Beliefnet and our partners
previous posts