Robbed at knifepoint, what he did after handing over his wallet

Hey, I admit, I don’t quite know what to think of this one.

Part of me, a big part, says this guys lives, even if he doesn’t identify it as such, the “Golden Rule.” He gave up both coat and cloak, walked the second mile, etc., all those biblical parable/analogies taught by Jesus Christ.

Another part of me thinks, “What were you thinking?” But you cannot argue with results.

So, here is the story of a 31-year-old Bronx social worker, Julio Diaz.

Julio had just gotten off his one-hour subway commute home and was walking to his favorite diner for a bite. That’s when a teenaged boy, knife in hand, demanded his wallet. Julio handed it over.

So, another mugging in New York? What’s the story? Happens all the time.

As the robber walked away, Julio called out. “You forgot something. If you’re going to be robbing people for the rest of the night, you might as well take my coat to keep you warm.”

Weirdness always makes people stop and take notice. It did in this case. The kid was stunned. He had to know. “Why are you doing this?” he asked.

Julio says it’s really simple. He figures if the kid is willing to risk prison for a few bucks, then he must truly be desperate. Then Julio says that, by the way, he was on his way to eat . . . why don’t you join me?

The kid does. They reach the diner, and Julio exchanges pleasantries with the staff. Waitress, cook, dishwasher, all are friends. Julio’s a regular. The kid is stunned, doesn’t get it. “You’re even nice to the dishwasher!” he says.

Well, yeah. Julio says that’s how he was taught: be nice to everybody. The kid says he’d heard that before, but hadn’t really seen it practiced.

Finally, the bill arrives. Julio reminds the kid that he’s the one with the money, now. The kid returns his wallet, Julio pays the tab . . . and then hands the kid a $20 bill. All he wants in return? The kid’s knife. He got it.

A bargain, that transaction.

And, an investment in a life.

For more about Julio, listen to this NPR interview. 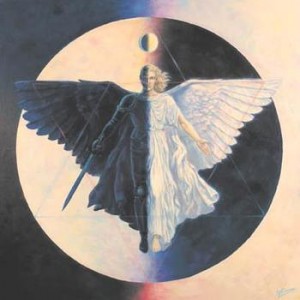 How Evil Are You? A look inside could be disturbing
archives most recent
More from Beliefnet and our partners
previous posts