The growing anti-Wall Street protests have triggered a sort of déjà vu experience for me.

It was probably inevitable, when the high school economics teacher was a closet Marxist, that my introduction to the “way things work on Wall Street” was a summary of the history of class warfare, and why ownership of the “means of production” could not be entrusted to a few “fat cats.”

Remember, this was the late 1960s, when the Soviet Union was still strong, and we were engaged in a losing war against the “Reds” in Southeast Asia; where anti-war protests by some of the older members of my Baby Boomer generation were often punctuated by North Vietnamese flags and chants of “Ho, Ho, Ho Chi Minh!” along with “Hell no, We Won’t Go,” or the somewhat milder urging to “Make Love not War.”

Draft cards were set ablaze, students were occupying government and college campus buildings. (Some women were burning their bras, but that was a different “struggle against the Establishment.”)

Mr. Green’s view of Capitalism, therefore, did not seem all that out of place in a small liberal arts college town in Eastern Washington where I went to high school. At Cheney High, we had our own underground “newspaper” (mimeographed) that would appear in stacks in the lobby intermittently, snatched up by a few of the curious before the vice principal confiscated them. We even had our own “sit in” in the lobby, about 30 of us wearing pre-arranged white armbands with red paint splotched on them (you know, “blood” of our brothers dying in the ‘Nam).

It broke up after an hour, though, when the vice principal threatened expulsion. After all, there was only so much one could demand of 16- and 17-year-olds, right?

So, I digress. Mr. Green. Class struggle. Capitalist greed. We exchange labor for money, swap money for food, shelter and clothing. Socialist principles were the only reason we also had such things as Social Security, unemployment insurance, minimum wages, eight-hour work days and 40-hour work weeks and had out-lawed child labor, he’d say.

And on those things, he was arguably right. So, I followed up on some suggested reading: Das Kapital. The Communist Manifesto.  Even Chinese Chairman Mao’s Little Red Book, though I stopped with that latter tome when I got to the part about “Political power grows out of the barrel of a gun.”

It was that pesky upbringing as a preacher’s kid popping up: the example of Christ’s pacifism and returning good for evil, love for hate, seeking change in the spirit, inside, to effect a peaceful revolution on the outside with the individual first, then society.

Faith, to me, was not just the “opium of the people,” as Marx insisted. He saw it as a fictional creation, the “sigh of the oppressed creature, the heart of a heartless world.” That was just half the story; to me, it was all those things and much more – not just a psychic relief from suffering through some future hope, but the impetus for regeneration now through the indwelling of divine Love, and yes. Hope . . . that we can, with God’s empowerment, conquer greed and selfishness in our actions right now, as well as looking forward to what lies beyond.

Mr. Green? The socialism you espoused recognized the need for a regeneration of human nature – but without what I came to believe was the only means of empowering it, i.e. Faith. You just can expect a cracked and flawed vessel to hold water. That’s what we humans are, cracked and flawed metaphorical pottery.

We need spiritual repairs — and not mere religion, which with its dogmas, self-interest and hierarchy too soon bog down into morally bankrupt institutions. We need to be remade, individually and then as a society, on the Potter’s wheel. Faith and belief are not the same things, after all.

You see, we are well able to identify the problems that plague us. To resolve them, though, we must reach beyond the primal cause of those problems – a schizophrenic and tortured human nature.

What will come of the anti-Wall Street protests? We’ll see. But ultimately, history has shown, placing faith only in humankind to change human nature has produced little gain, and torrents of death and pain. 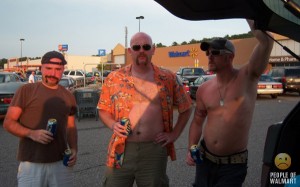 'People of Walmart' as proof of God's boundless, unconditional love?
archives most recent
More from Beliefnet and our partners
previous posts