Faith and belief: What I’ve learned from Mormons, Hasidim and a medicine man

Living in Utah, I’ve gotten used to The Question: Are you a Mormon?

No, I’m not. The closest I ever came to considering becoming a Latter-day Saint was in high school, when I developed a huge crush on a Mormon girl. She had long, dark hair and warm brown eyes that went on forever, but it was her inner beauty and artistic soul that caught my attention. Just holding her hand seemed to make time stand still.

Dianne gave me a Book of Mormon, which I read. When she asked me what I thought of it, I evasively  joked with her that it had some “interesting stories”. She asked me if I had a “burning in your bosom” that it was “true”, and when I said I did not, but thought it was fairly good for 19th century fiction, I lost her.

It was just too big a leap for a preacher’s kid who had read the Bible, first. I make no apologies for that, but I might apologize for the crass way I said it then, if I still could. Dianne died some years ago.

But that day, I saw the curtains fall on those eyes that once sparkled for me. A glimpse of pain, a sad smile, and the windows into her spirit were closed. We graduated, went to different colleges and one day I heard she had married a returned Mormon missionary. Five kids.

It was a good lesson in tolerance and respect for a 17-year-old kid. I began then to realize that someone with different beliefs, other scriptures and that “burning in the bosom” she spoke of can hold their expression of faith as sacred as I did.

Thae sense of The Infinite Other, whether borne by the Pentecostal/charismatic ecstasy I witnessed and experienced as child and adult, or some quieter, inner warmth like Dianne described, is what moves faith beyond intellect and pure reason and into the spiritual realms.

I’ve seen others reach out past logic into the metaphysical, too. I appreciated those moments, albeit without sharing the cultural and religious frameworks they belonged to.

In a Hasidic synagogue, I saw men with full, luxurious beards dance around the Torah, singing Yiddish songs of worship until the sweat rolled down faces that were lost in pure joy. Another time, I found myself in a Catholic cathedral, sitting quietly as a young man, the only other person there at the time, wept as he prayed, “Hail Mary, full of grace. Our Lord is with thee. Blessed art thou among women and blessed is the fruit of thy womb, Jesus.”

Later, I sat inside a Ute Indian sweat lodge, the smoke stinging my eyes, sparks rising from the fire with the medicine man’s splashes of spring water and wave of bundles of sweet grass over white-hot coals. The flames cast a glow on faces that were enraptured, joining in invocations of blessing from the Creator upon “All our relations.”

I share these anecdotes not to preach some sort of Universalist philosophy. I am a Christian, and that is my Truth. But that does not, cannot stop me from recognizing the desire in the human spirit, expressed in other ways, to reach beyond the finite to the Infinite.

And so, life moves in circles. Today, decades after that sweet Mormon girl and I diverged on different paths, there is irony. I live in predominantly LDS Utah, 38 years married to the love of my life, Barbara, with two grown children of my own. And, I am also blessed to count among my friends many Latter-day Saints – including their prophet, President Thomas S. Monson.

Recently, this man — who once regaled me with parables from his own life when a 10-minute interview turned into an hour conversation — spoke of his love for the Nazarene:

“None of us can conceive the full import of what Christ did for us in Gethsemane, but I am grateful every day of my life for His atoning sacrifice. At the last moment, He could have turned back. But He did not. . . . He taught us how to live. He taught us how to die. He secured our salvation.”

There is faith. That is different from belief. Faith is primal; belief is the framework of dogma and doctrine, organization and hierarchy humans impose to somehow define, or confine, what can be felt but not comprehended.

Yes, Dianne. The lesson was learned. 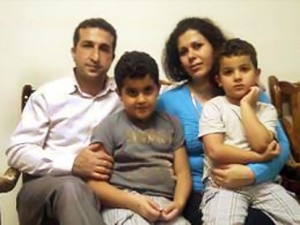 Facing death for faith: Iranian pastor is not alone in a world of martyrs
archives most recent
More from Beliefnet and our partners
previous posts