Remembering 9/11’s victims by recommiting to faith – and justice

At church, we somberly remembered, with song, video and a sermon on returning good for evil, the day a decade ago when Islamic terrorists hijacked aircraft and plunged them into the Twin Towers, the Pentagon and a Pennsylvania field, killing 3,000 people. And we should, always, remember that day and honor those dead – and the hundreds of thousands who have become casualties in the wars and strife that have followed.

Like the Bible, the Qu’ran contains stories of God’s love and judgment, and both the generosity and intolerance of God’s stumbling children. In context of times and places, these scriptures speak to healing hands and hands that wield swords, of laying down life in love and taking life in rage.

The Bible and Qu’ran, to their respective adherents, have this in common: As much as they are proclaimed to be the Word of God or Allah, they are as much the Word About God, or more specifically, the Word About Humankind’s History of Seeking God, and so often falling short. . . horribly short.

It would be disingenuous of me to say that I believe that one body of scripture is the equal of any other. Its the Bible that speaks to this preacher’s kid; it is where I find inspiration for living, examples to follow (and to avoid), honest accounts of flawed heroes of the faith, and context and perspective for living. It is the Bible that leads me to my higher purpose and Truth.

So, I do not personally find those things as deeply in other sacred writings. Still, I have found much to admire in them, especially when I see them used to inform charitable and peaceful living.

Therefore, I offer respect for the majority of Muslims who see jihad as a commitment to faith, rather than a call to violence. I would say the same for Hindus who find in their Vedas reason to choose non-violence and compassion over caste prejudice; or any other the world’s other scriptures, wherein they promote and value that thread of love – for our Creator, our fellow humans, our world.

Those are yearnings that seem to wind through the hearts of most sentient souls; they are principles which – for me – are best expressed through the words and example of Jesus Christ. These are the things that have stuck from my upbringing; just living life has taught me those desires to live in awe of our Creator, at peace with our fellows and with love rather than hate, are not exclusive to my own faith . . . as much as I treasure it as the best path to Truth.

My pastor said it is time to put away hatred for our enemies, as well as the culture and religion so many have lumped in with those who flew the planes of 9/11, and continue to murder and maim with bombs and suicide attacks that claim far more of their supposed co-religionists than their purported infidel targets.

Grief breeds fear. Fear leads to hatred. Hatred is fueled when we demonize entire religious and ethnic groups for the crimes of extremist splinter groups. It is the latter that remain our true enemies, those we maintain our vigilance against, and our commitment to ferret out evil, for justice’s sake. 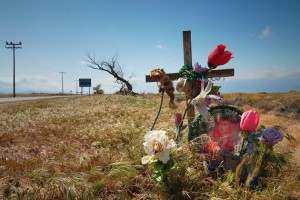 Faith in the public square: Of crosses, monuments and Christophobia
archives most recent
More from Beliefnet and our partners
previous posts