Of prophets and fools: The difference between the real, the self-professed

Sometimes, you need a crazy, loud or even obnoxious prophet to shake people up, make them rethink the slippery moral slope they are on and make a commitment to turn around and do what’s right.

John the Baptist, who identified himself as “the voice of one crying in the wilderness,“ knew about confronting the evil of his day, and he cut quite the bizarre figure in his camel’s hair coat (can you say, “rash”), and bellows redolent with locust and honey.

The Old Testament’s Jeremiah was known as the “weeping prophet,” and no wonder: his oracles were full of warnings and portents of captivity and destruction, his reward ridicule, beatings and being tossed into a mud pit to die. He was rescued, but Israel was not, falling to the judgments Jeremiah had proclaimed.

One more example of weird heavenly mouthpieces would be Hosea. To get across his point to idolatrous Israel, he married a hooker, forgave her adultery and used it as a concrete illustration of the abstract concept of God’s wooing of his rebellious children.

In the 21st Century A.D., such behavior certainly would get attention, but it doesn’t seem to do very well in convincing people to change their ways. Arguably, western civilization is in moral decay and ethically rudderless, and in dire need of renewed spiritual foundations. We probably do need a modern equivalent of prophecy and exhortation to aspire to those better angels of our nature.

What form such “prophecy” would take, however, is very unlikely to follow the model of the wackadoo who heckled President Obama  Monday night during a fundraiser in West Hollywood, Calif. Screaming from the front row, a young man not only proved himself an idiot, but spattered more mud on the already besieged image of Christianity by his off-the-wall behavior.

“Christian God is the one and only true living God! The creator of Heaven and the Universe!”  he shouted.

Well, OK. The message, if not the venue, seems pretty much standard. But then the bozo just had to add, as security moved in, “Jesus Christ is God, Barrack Obama is the Antichrist!”

Obama, who has repeatedly identified himself as a born again believer, went and ruined it all, though. No horns sprouted, no “666” tattoo sprouted from his brow (or on his undershirt, left). “I agree Jesus Christ is the Lord,” he said.

There are times to speak out, bros and sisses. It helps, though, to come across with a bit of sanity, and to do so within the appropriate venue.

And, especially these days when hypocrisy has become a lifestyle, people are paying far less attention to what you say than to what you do.

St. Francis once gave advice on this that should be the rule-of-thumb for believers today: “Preach the Gospel at all times and when necessary, use words.” 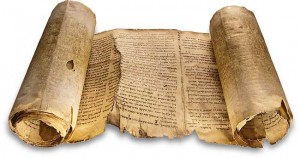 Dead Sea Scrolls: From caves of Qumran to Google's 'cloud'
archives most recent
More from Beliefnet and our partners
previous posts