It’s inevitable. There you are, possibly dozing off mid-way through your pastor’s sermon when he pulls this out of his ecclesiastical hat: “In the original Greek” . . . or original Hebrew, or Aramaic, etc.

So much for those Sunday morning daydreams. Time to pay attention, because just as inevitable is that there will be some insight beyond the English translation of the cited scripture, perhaps even an implied meaning that throws some doctrine on its ear. And that’s always worth hearing, isn’t it??

As a young Pentecostal preacher, I suspect my father resorted to the tried-and-true holyghost evangelist’s sure-fire oratorical “wake up” calls of “Can I get an amen?” or, in extreme cases, “It’s time for a REVIVAL!”

As he got older, however, and more scholarly in his biblical studies (as witnessed by those many hours spent hunched over a huge, leather-bound Greek Lexicon and piles of scriptural commentaries), Dad resorted more to the linguistic strategy.

For example, it was from Dad I first learned that the word translated from Greek as “angel” (Άγγελος or “angelos”) was more accurately meant to be “messenger,” in English.

It’s not that there are no “heavenly beings” like those we typically call angels, (cherubim, etc., are specifically identified in Bible, after all) but that just as often — perhaps more often than not — our King James Version Bible angels may have been decidedly human messengers or agents serving God’s purposes.

It was also cool to learn, as a budding writer, that Jesus and John the Baptist enjoyed-play to make their points.

For example, in John 12:25, Jesus used two words virtually identical in their English translation, which lost the nuances of the original Greek. “He that loveth his life (ζωὴν, pronounced zōēn) shall lose it; and he that hateth his life (ζωὴν again) in this world shall keep it unto life (ζωὴν, psuchēn) eternal.”

The King James Version caught the theme, albeit roughly. In Greek, though, the meaning might be closer to something like this: “If you are obsessed with just your earthly, day-to-day living, you could lose out on the broad sweep of Life in you and all around you, even into Eternity.” (Bob Mims paraphrase).

John the Baptist had his fun with a sort of Aramaic alliteration, playing two words that sounded alike (banim and abanim) off of each make a point in Luke 3:8: “Bring forth therefore fruits worthy of repentance, and begin not to say within yourselves, We have Abraham to our father: for I say unto you, That God is able of these (banim) stones to raise up (abanim) children unto Abraham.”

Along with wearing camel’s hair cloaks, eating locust and honey and dipping people in the Jordan River, John helped his followers to remember a lesson about the miracle of repentance . . . with a word game.

Thanks, Dad, for triggering my curiosity about words and how important they are to gaining the meaning and flavor of the original intent of their speakers. That is especially important when it comes to the Word of God.

And, a more personal gift from that emphasis is this: Now, when I read those verses and others, I can see a smile on the face of a Nazarene rabbi teaching the poor, and a mischievous glint in the eye of a desert prophet. 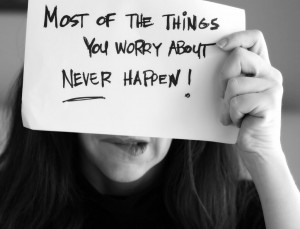 A choice: Worry yourself sick, or pray, trust and move on
archives most recent
More from Beliefnet and our partners
previous posts