So, Baylor University says, 20 percent of Americans are convinced that the Creator of the Universe, He Who Holds Existence in His Mind, the Prime Mover, i.e., God . . . actively involves Himself in the world’s economy.

And, one in five Americans believe The Lord really, really likes the “free market” concept. You know, the same capitalism-gone-amok system hailed by corporate raider Gordon Gekko in the movie Wall Street with the immortal immoral words: “Greed, for lack of a better word, is good.”

The survey was taken among 1,700 randomly chosen adults and conducted for Baylor by the Gallup folks. It covered a lot of ground over numerous political, moral and economic issues.

One in four respondents saw their work as an assignment from God, and 36 percent said their desire to positively reflect their faith inspired them to do their best in the workplace.

I’ve always wondered about the tendency of American Christians in particular to believe they are particularly loved and favored above all other believers in the world. After all, more than 2 billion human beings embrace Christianity — and the fastest growing segment worldwide currently is the Pentecostal/charismatic movement, at 250 million or more adherents.

By either count, total Christians or just the tongues-talking ones, the United States is a very distance also ran, even if you accept the broadly inclusive estimate of 76 percent of the nation’s population claiming Christian heritage.

We also tend to see our Republic as inspired by the Almighty, though the prophets of the Old Testament and Jesus and his apostles in the New Testament uniformly speak of a divinely-ruled kingdom. In other words, there will be no popular elections in heaven, or when heaven comes to Earth.

No partisan gridlocks in a Celestial Congress. No sharply divided Heavenly Supreme Court justices deciding righteousness on a 5-4 vote.

I love America. I am thankful for the freedoms we enjoy. We are blessed. But I would be no less of a child of God if I lived in North Korea, Guatemala, New Guinea or Outer Mongolia.

We forget we are supposed to be citizens of Heaven, first. Wall Street, folks, is not the earthly reflection of some platonic heavenly ideal of spiritual streets of gold.

And for certain, there’s not a human government in existence, including our own, that was drafted at the Throne of God and handled down to men. 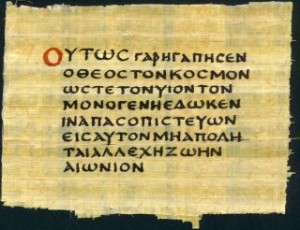 Lost in translation: Jesus' puns, and John the Baptist's word play
archives most recent
More from Beliefnet and our partners
previous posts