Hear the one about God . . . wanting you to read this blog?

In the mostly Pentecostal/fundamentalist churches my Dad pastored, quips that played off scriptures would get a quick frown, if not a secretive note or phone call to the Rev. Robert E. Mims Sr. advising that his son was “in need of much prayer and counseling.”

Hey, that actually was a quote from one note. And I probably was in need of those things, and still am. That’s for another blog, though.

To those folks in the pews of yore, there was nothing funny about God, or Jesus, or anything “holy.” The pinch-faced crones and their brow-beaten husbands wouldn’t even smile when Dad tried to point out the Lord’s sense of humor, describing some self-righteous types of his time as: “blind guides, which strain at a gnat, and swallow a camel.” (Matthew 23:24 KJV).

The imagery made me laugh, anyway. Still does.

The last congregation Dad pastored, though, was far more laid back. It was a “community church,” non-denominational, and eclectic group of Presbyterians, Episcopalians, Lutherans, Methodists, a Baptist or two, and a couple Pentecostals, seasoned with an occasional lapsed Catholic.

It was in that environment that I heard the one about Moses, Jesus and an ethereal old guy playing a round of golf. It begins when Moses tees off, his shot rolls toward the water trap and when he raises his club, the water parts and the ball rolls to the other side.

Jesus is next, blasting a long one that plunks right in the middle of the same water trap – but hovers just above the surface. He then strides out on the water and chips the ball onto the green.

Then the old guy, rather listlessly, takes a swing. The ball goes wide, over a fence, onto a highway, bounces off a car, a tree, the roof of a house, into a rain gutter, down the spout, back onto the golf course, off a rock and onto a lily pad, where a frog snaps up the ball only to be caught in the talons of an eagle which flies over the green just as the frog coughs up the ball . . . which bounds into the hole.

Disgusted, Moses throws down his club, turns to Jesus and sputters, “I hate playing with your Dad.”

A classic. But since then, I’ve also become an aficionado of “If God wanted . . .” one-liners. Here are just a few of the hundreds out there (with attribution, where available):

“I don’t exercise, If God had wanted me to bend over, he would have put diamonds on the floor.” – Joan Rivers

“If God had wanted man to play soccer, He wouldn’t have given us arms.” – Mike Ditka

“If God had wanted to be a big secret, He would not have created babbling brooks and whispering pines.” – Robert Brault

“If God had wanted us to be vegetarians, why did he make animals out of meat?” – anonymous

And maybe my favorite:

“If God intended man to understand the human mind, He wouldn’t have given him one.” – bumper sticker 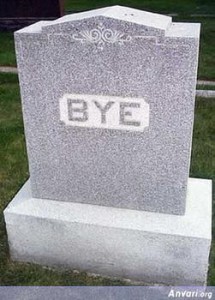 'Christian burial' or 'Christian cremation'? Make mine well-done
archives most recent
More from Beliefnet and our partners
previous posts