Are Christians ignoring the Prince of Peace?

I first caught the disconnect between the fundamentalist Christian upbringing I had, and what Jesus actually taught, when it came to the question of war.

In Sunday school, this preacher’s progeny, along with the other kids, would be led in such songs as “Onward Christian Soldiers” and “I’m the Lord’s Army.” If the Sunday School teacher was especially inspired she’d have us all on our feet, marching and swinging our arms as we sang:

“I may never march in the infantry, ride in the cavalry, shoot the artillery. I may never zoom o’er the enemy, but I’m the Lord’s army, yes sir!”

In the ensuing years, Vietnam came onto the living room TV at the home of the Rev. Robert Mims Sr., and as older classmates of mine were drafted, one by one, the horror became personal.

Steve Amunson came back on medical discharge, half his guts destroyed by a burst from a Viet Cong AK-47 while he was on patrol in the Mekong Delta. Then Lee Olemacher came home in a flag-draped coffin that I helped carry to the cemetery. I remember still the hot tears on my face as the honor guard fired its salute and “Taps” was played.

Then, I was 18. My lottery number was low, and the draft board made my acquaintance. Suddenly, I had to decide whether I would hike into Canada through the Kaniksu National Forest in northwestern Idaho, as some of my friends had done, or serve – and if I served, how.

During World War II, my father had been given a ministerial deferment as a conscientious objector. He was tabbed to be an Army chaplain, but by the time they got around to him, Hiroshima and Nagasaki were ashes and the war was over.

Vietnam, in the early 1970s, was still raging. Thinking of Steve and Lee, I rather quickly ruled out flight to Canada. But did I want to be put in the position of carrying a rifle, of seeking out another human being to kill? No; but I could see myself taking care of wounded, and if needed, protecting them from an enemy while I did.

So, I wrote the draft board about my beliefs, that as a Christian I wanted to save, not take life. They granted me 1-A-O status, and I resigned myself to induction and someday seeing Southeast Asia with a red cross armband. A week before my induction exam, President Nixon suspended the draft, and I was spared.

I still have mixed feelings about it. I honor our men and women in uniform and their service to our country. I honor their dedication, to the point of death, to defend us. And I don’t question their Christian bona fides because they choose to carry a rifle instead of a medic’s bag.

But I do question the general militancy, the seeming embrace of violence and revenge couched in patriotism, displayed by many of my brothers and sisters. After all, most of my co-religionists probably would turn the other cheek if personally assaulted (at least once, anyway), forgive and eschew revenge.

Why then, the disconnect with our willingness to go to war? What was to be a limited incursion in Afghanistan to oust al Qaida was accomplished within a couple years, but we stayed on, taking lives and losing lives. Even when Osama bin Laden was finally killed, we continue to prop up a corrupt government and take and lose lives.

Our invasion of Iraq, whether our leaders truly believed Saddam Hussein had weapons of mass destruction or not, turned out to be ill-conceived. It took us the better part of a decade to wind that war down, and we still have tens of thousands of our young men and women in peril there.

Jesus may have made a whip and driven off the thieves and cheating money changers in the temple of his day, but he didn’t call down heavenly napalm to “kill ’em all and let God sort ’em out.”

When soldiers came for him in the Garden of Gethsemane, he reprimanded Peter for brandishing a sword, and he did not return one blow for the many he took.

And when they crucified my Lord, no legions of angels or flaming chariots, or fire and brimstone came broiling out of the skies. He forgave, he died and he rose again, asking us all to spread the gospel of peace to the world.

I thought on all this after seeing a very well presented discussion of Christ’s call to nonviolence penned by the Rev. Drew Smith of Henderson State University in Arkadelphia, Arkansas. What he has to say is worth reading, for anyone who calls on the name of the Prince of Peace. Take a look: “Why Christians Ignore Jesus’ Call to Nonviolence” 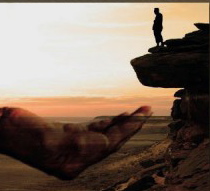 Belief in God: Does it all come down to a 'gut feeling'?
archives most recent
More from Beliefnet and our partners
previous posts