Walking into the sunset, listening to God’s guitar

It had been a miserable day at work. A story as old as time; you know, the kind of day we’ve all experience, the one punctuated by the proverbial irritable manager in dire need of fiber.

I make it a habit to exercise an hour or more daily. Bicycling, some moderate weight-lifting, hiking. And I was in dire need of physical venting. But this night, waiting for a 100-degree day to cool, I just didn’t want to go to the gym. Instead, I grabbed by mp3 player and headphones and headed out for a brisk four-mile walk.

It had cooled into the low 80s when I left, and about an hour of dusk remained. It was warm, still and humid, and I was soon sweating. But with Alter Bridge filling my ears, I began to unwind, enjoying the steady breaths, my neck muscles relaxing, the sheen of perspiration on my brow, and relishing the warm glow from blood pumping in my legs.

I almost laughed out loud when I heard the lyrics from Ghost of Days Gone By, propelled by the voices and guitar work of Mark Tremonti and Myles Kennedy, telling me, in so many words, to just let go: “Yesterday is gone, we can’t go back again. Do you ever cry for the days gone by? Do they haunt you like a ghost until the end?”

How about that, an epiphany. God spoke, not in thunder, the wind or an earthquake, but the in words cutting like a crystal knife, soaring on Tremonti’s electrified strings and Kennedy’s four-octave ranged tenor vocals.

He does that sometimes, God does. And He doesn’t always do it through hymns, or even officially “Christian” music.

I reached the midpoint of my trek, crossed the street and headed back. The epiphany? It continued, displayed in an orange and gold sunset over the western hills that took my breath away and made my heart swell into my throat. A few clouds caught the light, looking like amber velvet unfolding into the horizon.

And, there was Kennedy, again in my ears, belting out the lyrics of Breathe Again. It was perfect, as if written for that excruciating beautiful moment: “So I set out on my own just to breathe again, touch the light that calls me home just to reach the end, where I’m free to breathe again.”

And as I walked up the hill to home, suddenly, like at the end of a heartfelt prayer, things were better. 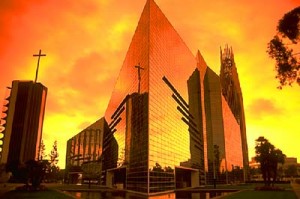 Crystal Cathedral: Is the glass house Schuller built about to shatter?
archives most recent
More from Beliefnet and our partners
previous posts