Jesus is the Rock of Ages on Facebook, too

It turns out that the Son of God is no stranger to social media. He did that pretty well, as you  recall, more than 2,000 years ago.

Huge crowds followed him, even into the countryside. He taught them, blessed them, healed them and fed them. When he rode into Jerusalem in triumph, the cheering throngs crowded the streets, paved the path ahead of his donkey with palm fronds.

That was then, this is now. Jesus not only is on Facebook, but on a given day he’s beating out celebs. Lady Gaga? Runner-up. Justin Bieber? Popular, sure, but no messiah. Twilight? Vampires fade in the Light, too, you know.

The “Jesus Daily” Facebook page has more than 5 million “friends,” while “Jesus Christ” the Facebook Page adds another 2.7 million. And then there are the hundreds of thousands who joined the ranks of similar pages with titles like “Jesus the Christ” or “Jesus ‘Christ’ of Nazareth.”  There’s even “Jesus Christt,” which offers its 14 friends (and counting) only a picture of Him . . . with a dinosaur. (That’s it, to the right).

From reverent to arguably sacrilegious, Jesus is big on Facebook.

In an ecumenical vein, though, let’s give props to other expressions of the divine. “Prophet Muhammed” was approaching 323,000 friends when I last checked. “Allah” was closing in on 114,000; and “Lord Krishna” . . . well, that’s hard to tell.

Explanation: There were at least 50 Facebook pages devoted to Krishna, perhaps the most predominant of Hinduism’s avatars of the Supreme Being. So, theologically, I guess it should be no surprise Krishna has so many Facebook . . . incarnations.

That, too, I guess, shouldn’t  be a shock. After all, the guy did teach that Nirvana was, among other things, a state of bliss reached only by shuffling off desire, cravings, anger, etc . . . . or, one might extrapolate, fame on Facebook. 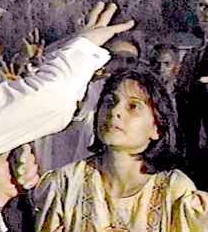 Believe in healing? Yes. Faith healers? Not so much
archives most recent
More from Beliefnet and our partners
previous posts