Believe in healing? Yes. Faith healers? Not so much

To be the son of the Pentecostal minister is to believe in the possibility of divine healing. And, I do.

However, a lot depends on how broadly you define “healing,” and that, in turn, depends on your willingness to not limit how, when and where healing takes place.

What I have trouble believing in are the self-proclaimed “faith healers.” Some are well-meaning. Others, naïve. A lot of them, though, have made this “ministry” a profession –a deceptive, cynical one that preys on the desperate – and makes a mockery of the gospel of compassion and love.

SO, brace yourself. I have a lot to say.

Even as a wide-eyed child, I seemed cursed with the ability to keenly observe. One of my earliest memories was when I was five years old, sitting with my mother in Bakersfield, California “healing service” when the evangelist proclaimed, “The holyghost is in this place, moving among you right now!”

I peered into the rafters, looking for . . . something. A cloud perhaps, a mist, something. I was scared, and fascinated, my heart pounding with anticipation. The only “ghost” I was familiar with was “Casper the Friendly Ghost.” I half-expected to see something like the cartoon figure; maybe bigger, probably with a halo and, of course, a more serious visage.

After all, people did some unusual things, I had noticed, when holyghost enveloped them. Danced. Laughed. Cried. Spoke in tongues. Fell in blissfully backward into the arms of designated “catchers,” who had blankets nearby to safeguard the modesty of women who were “slain by the Spirit.”

Well, I quit looking for the holyghost. (Yes, one word, as I’ve mentioned before about the old-time Pentecostal dialect). Mom, anxious to quiet my squeaking inquiries, had explained He was invisible, and that His work was something mysterious and internal, anyway.

Made sense. It had to be that way.

Flash forward and I was 12, attending a “camp meeting” prayer service. I got close enough, finally, to see the “holyghost bump” for what it was: a loser rendition of a martial arts “open palm” strike. Instead of being delivered to the nose, chin, solar plexus or groin with kiai battle cry, though, the evangelist might shout, “Heal!” or “Here it comes!”

Anyway, I saw the poor guy being prayed for take a shot to the forehead, stumble backwards and look a bit confused and stunned as a red blotch deepened and spread across his supraorbital ridge.

And yet, I believe. A miracle, that. Over the years, I’ve witnessed surgeries and treatments succeeding beyond even the most optimistic expectations; unusually rapid recoveries, and spontaneous remissions of cancers that even baffled physicians. A common denominator: prayer. In some of these cases, doctors just shrugged; others used the “M” (miracle) word.

Healing, though, is what the grateful recipients of prayers believed had happened.

But here’s the thing: None of those healings I knew of came via some faith healer’s head blows, or generic, widely-applicable “word of knowledge”  aimed at the desperate and gullible, or after hearing the inevitable, apocryphal tales of veritable acts of Christian magic being performed in some distant land *.

(* India and South America seem favorite locales for these stories. Recently, I heard of a young faith healer telling his rapt audience of supposed “healings” of not just a decapitated man, but a dismembered one as well.)

More dangerous than such tales, though. are those who see it as a sign of faith to quit medications and treatments without seeing their doctors first (to hesitate, in the first instance, or to be examined, in the second, are obvious signs of disbelief and will earn you the feigned look of horror reserved for the rankest of heretics).

Years ago, one of finest Christian men I’d ever met died of colon cancer. Dave lived his religion more than anyone I’ve known other than my own father. Dave prayed for healing, and for him, the answer was no. He accepted that because his trust in God was the foundation of his faith.

Chemotherapy gave him one more good year, and he never wavered in his love of God and people. The time came, though, when cancer resumed its march. His family urged him to attend a local tent meeting put on by a traveling preacher with a “healing ministry.” But this fellow wanted nothing to do with a sallow, frail Stage Four cancer patient. Eventually, though, he reluctantly laid hands on him, “coming against” the cancer.

In the weeks ahead, Dave got worse. The healer? He blamed . . . Dave. Not enough faith, obviously. After all, how many times had Jesus told the healed, “Your faith has made you whole,” right? (Actually, Jesus, Peter and Paul are recorded in scripture with healing people who weren’t believers, let alone brimming with faith . . . but that just complicates the equation).

And oh, the man told Dave this, too: If you had “sin in your life,” you’re out of luck. Now there’s an ironclad escape clause, since honest Christians readily admit they are sinners in constant need of grace.

“Do you think he’s right? Is that why I wasn’t healed?” Dave asked me.

“No,” I said, choking up. “No one could meet those standards, and this jerk knows it.”

Dave smiled and shook his head. After a while, he sighed: “Well, it’s all right. I’m ready. I’m at peace with this.”

A few weeks later, he slipped away, his family and friends around him. It was a celebration. That hospital room felt like a holy place. Time itself stopped for a few minutes and love ruled. Call it the Presence of the Lord. (Eric Clapton’s song by that title had an interesting origin, by the way).

And we knew, Dave had been, finally, healed. 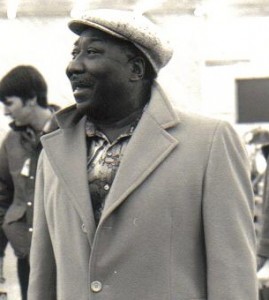 Can Christians have the blues? Yes - and play them, too
archives most recent
More from Beliefnet and our partners
previous posts