Priests and church members in China’s immense underground Catholic Church were arrested this weekend in the community of Tianshui — as the Chinese government continues its persecution of Christians.

Among those rounded up were the administrator of the underground diocese, Father John Baptist Wang Ruohan, retired Bishop Casmir Wang Milu, Father John Wang Ruowang, as well as several other priests and dozens of parish lay leaders, according to sources.

Bishop Wang and the two Wang priests are all brothers. They are being held in different places and subjected to political indoctrination sessions designed to break their will. The Chinese government prohibits Chinese Catholics from having any contact with the Pope or the rest of the worldwide church — and insists they participate in a government-run Catholic church not recognized by Vatican.

The vast majority of Chinese Catholics have refused, instead worshipping in makeshift “house churches” with priests and bishops ordained by the church in Rome. The Vatican automatically excommunicates any priest or bishop who joins the Chinese-government church. Recently, Pope Benedict XIV extended leniency, suggesting that excommunication might not be mandatory for priests who come under extraordinary coercion by the Chinese government.

The underground diocese of Tianshui had maintained a comfortable relationship with the police and government authorities. The two Tianshui communities, the official and underground, have a total of 20 thousand faithful and 27 priests, 15 of which belong to the underground community. In 2003, Monseignor. Wang Milu retired. The government-appointed bishop, Jinglong Augustine Zhao died in 2004 and the government appointed in his place his nephew, Zhao Jianzhang Woods.

According to observers, the arrests are designed to forcibly convince members of the underground — which has more priests than the government-run church — to accept the nephew prevent an underground priest from being elected bishop.

The government had already been attempting to slow growth in the underground church by preventing the election of underground priests, arresting several diocesan administrators. In recent months, two other priests were arrested, possible candidates to be bishop.

Two weeks ago, Chen Hailong, underground priest of the diocese of Xuanhua was released after his arrest in April. During his 4 months detention he was abused physically as well as mentally and coerced to join the government-run church, which is called the “Patriotic Association” and sever his ties with the Vatican.

About the same time as Chen’s release, Wang Chengli, an underground priest of 48 years who is the administrator of the diocese of Heze serving Canzhou and Shandong, was arrested.

Under pressure to sever his ties with the Vatican, he was left for days without food or water.

The Catholic Diocese of Tianshui asks for the prayers of Christians worldwide for the release of their priests and faithful. 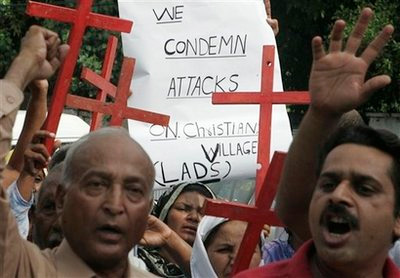 Husband, wife get 25 years for allegedly touching Koran without washing their hands
archives most recent
More from Beliefnet and our partners
previous posts