More than 1 million Christian children are victims of persecution worldwide, according to the international support group Open Doors.

“Children often pay a high price for their own faith or for the fact that their parents are faithfully following Jesus,” says Makus Rode, head of the Open Doors operation in Germany.

In such countries as North Korea, Laos, Sudan and Burma, he said, children watch as “their parents are shot and killed in front of their eyes.” In countries such as Pakistan, Egypt and India, “many children suffer of poverty because they are of a Christian family,” he noted.

It is not uncommon for Christian children to be snatched from their parents.

In Egypt and Iran, there are increased numbers of reports of Christian teenage girls being abducted and forced to “marry” Muslim men, often who have multiple wives. The girls’ parents are told the girls ran away from home, voluntarily converted to Islam and wish no contact with their families. In both countries, police seldom intervene.

﻿﻿In Egypt at least two churches were burned down in the last six months because of false rumors that such girls had been rescued by their Christian families and had taken refuge in the churches.

In Malaysia, 15-year-old Noviana Malewa is scarred for life after she and three teenage friends were ambushed on their way to a Christian school by Muslim extremists. Three of the girls were beheaded and died at the scene. Noviana alone survived. The attackers bragged in the media of their action against the four Christians.

Open Doors was founded in 1955 by Brother Andrew, bestselling author of God’s Smugger. Today it is a non-denominational Christian mission supporting persecuted Christian believers in more than 45 countries.

Brother Andrew, a native of the Netherlands who turned 82 years old last week, was born Andries van der Bijl. He is credited with bringing in millions of Bibles to “closed” countries, particularly to Communist countries before the fall of the Soviet Union. In 1981, Open Doors delivered one million contraband Chinese bibles in one night to a beach in the village of Gezhou, China. 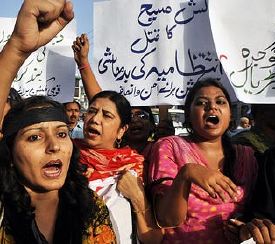