When Benny met Barry: “I’ll pray for you!” 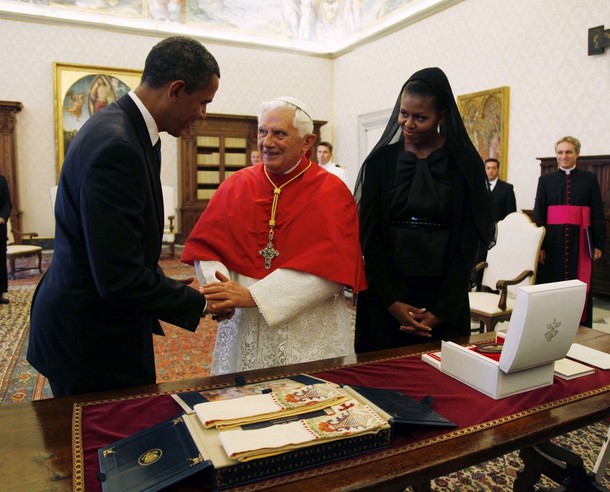 The first word via Vatican Radio and first image (that I saw) via Rocco:

Speaking to Vatican Radio, Press Office Director Fr. Federico Lombardi said “moral values in international politics, immigration and the Catholic Church’s contribution in developing countries” were key topics of discussion between the pope and the president.

In addition, Fr. Lombardi said the they discussed inter-religious dialogue and Middle East peace, with both reaffirming the need for a two state solution. He said the US president “reiterated his commitment to reducing the incidence of abortion”.

President Obama’s parting words to Pope Benedict Friday were that he looked forward to future strong relations between the United States and the Holy See, Pope Benedict told the President: “I thank you for all your work! I’ll pray for you!”

As for the substance, the official joint statement in English (original language) is here.

In the course of their cordial exchanges the conversation turned first of all to questions which are in the interests of all and which constitute a great challenge for the future of every nation and for the true progress of peoples, such as the defence and promotion of life and the right to abide by one’s conscience.

Reference was also made to immigration with particular attention to the matter of reuniting families.

The meeting focused as well upon matters of international politics, especially in light of the outcome of the G8 Summit. The conversation also dealt with the peace process in the Middle East, on which there was general agreement, and with other regional situations. Certain current issues were then considered, such as dialogue between cultures and religions, the global economic crisis and its ethical implications, food security, development aid especially for Africa and Latin America, and the problem of drug trafficking. Finally, the importance of educating young people everywhere in the value of tolerance was highlighted.

Carol Glatz and Cindy Wooden also have this account:

As they met, Obama told the pope, “It’s a great honor; thank you so much.”

The two sat down at a desk in the papal library and began discussing the G-8 summit — the meeting of the world’s wealthy industrialized countries, which concluded that morning in L’Aquila, Italy. The summit focused on the economic crisis, climate change and global tensions.

Pope Benedict told the president, “You must be tired after all these discussions.”

The president responded that the meetings marked “great progress” and “something concrete,” although the precise topic they were discussing at that point was unclear.

Pope Benedict gave Obama a mosaic showing St. Peter’s Basilica and Square, an autographed copy of Caritas in Veritate (I wonder if Obama will edit it with a red or gold pencil?) and a medal marking the fifth year of his pontificate. (That would into his second term, in Obama’ envious eyes.) The president told the pope the mosaic, which was made in the Vatican’s mosaic studio, “was very beautiful,” according to CNS, and would have “a place of honor” in the White House.

Apparently Benedict gave the president a stole that was placed on the remains of St. John Neumann.

And CNS’ Cindy Wooden reports that the pope also gave Obama the Vatican document on bioethics, released in December. A little light reading for illumination on the plane ride to Ghana.

Signs of the times: Obama's eye
archives most recent
More from Beliefnet and our partners
previous posts